something big  dares itself with that title, two words that are repeated ad nauseum throughout the interminable 108 minutes of this comedy-with-killing.  Absurd plot, not worth describing, badly edited, it involves Dean Martin, Brian Keith, Honor Blackman, Ben Johnson and Albert Salmi being completely wasted in one of director Andrew V. McLaglen’s worst outings–and that’s saying a lot.  From 1971, featuring a slew of familiar weathered faces: Denver Pyle, Robert Donner, Harry Carey Jr., Edward Faulkner, Paul Fix, David Huddleston, and for the heck of it, Merlin Olsen. 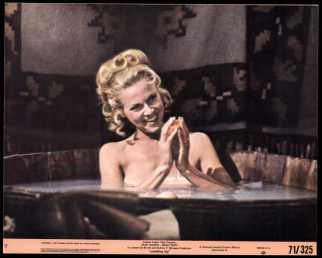 Dino loved westerns, and appeared in eleven, starting with Pardners back in 1956 when he and Jerry Lewis were still a team (barely). Rio Bravo is a classic, and features  his best serious acting job. The Sons Of Katie Elder is fun, while Bandolero and 5 Card Stud at least hold your attention. The rest are dogs; the jokey Sergeants 3, 4 For Texas and Texas Across The River and the serious Rough Night In Jericho and Showdown. The last is the worst, with something big hovering.  At least Ms. Blackman doesn’t get choked to death on a diamond necklace, as she endured in Shalako.  Ben Johnson could console himself with his Oscar win for The Last Picture Show, the same year this cowpie landed at spot #142. 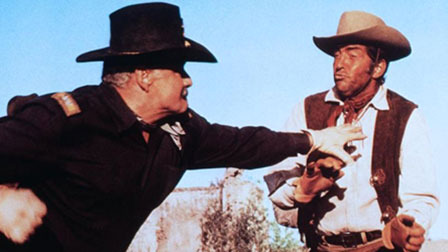