Emptying out fabled Hose of Ideas

RED HEAT—-–wait–a good Russian? how is this possibl’ski?  Only with Arnold. Atrociously limp 1988 snorer from director Walter Hill tries to recapture the glory of 48 Hours and his earlier action hits, and bites the snow after ten minutes have slug-crawled by. Another 93 are required to finish it up, filled with bad jokes, boring action and unlikeable people.  They should have called it Red Yawn.

Sub-animate Moscow cop (Arnold Schwarzenegger) is teamed with a motor-mouth Chicago dick (James Belushi, beating it into the tundra) to go after Georgian (Tbilisi, not Atlanta) drug lords.  Shot in Hungary and Austria, with a few scenes in Red Square, the $29,000,000 worth of punches, gunshots and wreckage were glommed onto a pathetic script that Hill and six other contributors made up as they went along. 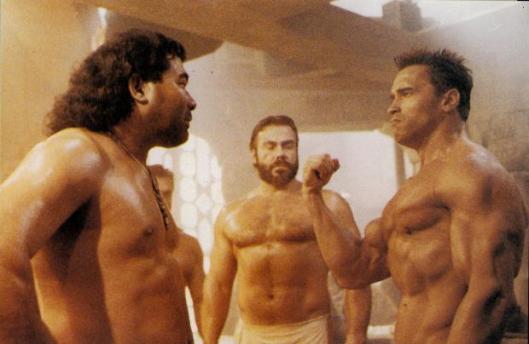