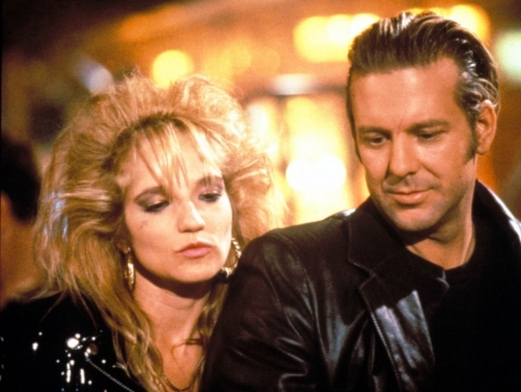 JOHNNY HANDSOME—-cruel 1989 crime drama directed by Walter Hill in the same mean mood he must have been in when he did the Bruce Willis beatdown Last Man Standing a few years later. Unpleasant from start to finish, it sees disfigured ‘John Sedley’ (Mickey Rourke, art imitating life) get out of the slam, have his face fixed up, even the score on slimeballs, only to get it worse than before.

It cost $20,000,000 to sic on the public, but merely nibbled blood-bait for $7,238,000.  With malicious input from Ellen Barkin, Morgan Freeman, Elizabeth McGovern, Forest Whitaker, Lance Henriksen and Scott Wilson.

As Hill opined :”… this one has a hard road commercially, and I’d like to see it have a chance to find an audience that will be interested. Some people like the movie and others are really offended by it. That’s fine with me.”  94 minutes of this hurt-for-all makes a good way to ruin an evening.