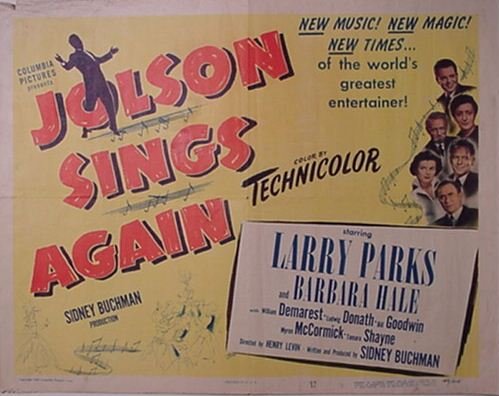 JOLSON SINGS AGAIN—-this chestnut burlesque on fact met with a slug of success back in 1949, earning three Oscar nominations (Writing, Cinematography and Scoring) and plugging Colombia’s coffers with $5,000,000, the years third biggest hit.  As pile-it-on sequel to 1946s smash, the superior The Jolson Story, it reworks half of the earlier film into its plot, a sappy contrivance on how Jolson’s career was reinvigorated by WW2. What a break!   Larry Parks once again does his superb cover job, and co-star William Demarest repeats his role as the sympathetic manager.  Rather enjoyable many long years ago, as a kid, watching with parents who’d grown up hearing Jolson, getting some vicarious pleasure from their enjoyment of the old tunes.  Plus, the original movie was darn good.  Seen lately, this one is a weary wade, and Jolson’s ego-travails, let alone those old-time ‘blackface’ numbers, will mean as much to current audiences as a lecture on the Reformation (“Al Who?”).  Watch the first one, give this yawner a respectful but sincere pass.  Directed by Henry Levin, with Barbara Hale, Ludwig Donath, Bill Goodwin, Myron McCormick and Tamara Shayne.  Weirdest scene has Parks, playing Jolson, watching Parks, auditioning as Jolson for the first movie. Sticky sweet and sucky.

One thought on “Jolson Sings Again”