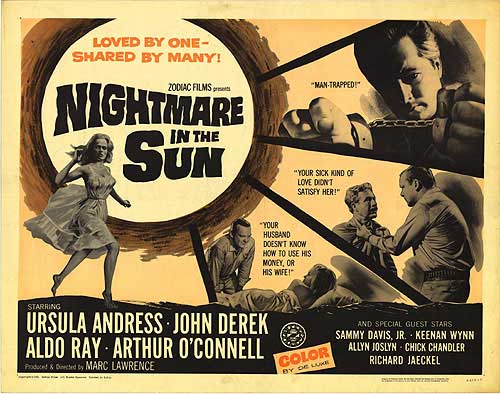 NIGHTMARE IN THE SUN—–nightmare is the word for this 1965 howler, co-conceived, co-produced and directed by veteran heavy Marc Lawrence. It was also co-directed, sans credit, by its leading man, John Derek.  If you’re familiar with Derek’s other turns at the helm you might want to watch for its nonstop weird badness, though it still can’t touch the visionary depths of his official directorial bow, Once Before I Die.  That masterpiece featured Derek’s wife, Ursula Andress, also present here as the sex-bomb launch pad for a hitchhikers trip into hell out in the scorching Mojave Desert.  Writing, directing, acting, music; you name it: in the 80 minutes of this fever dream Lawrence, Derek & crew wreak havoc on them all. 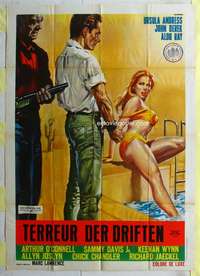 Chewing the termites out of the scenery are Aldo Ray, Arthur O’Connell, Allyn Joslyn, Keenan Wynn, George Tobias and John Marley.  Sammy Davis Jr. is on hand for one scene and few lines, clearly as a favor for someone.

It does have a classic moment when the enraged hubby shoots Ursula’s teddy bear, four times, with a shotgun: there’s only so much cuteness a fella can take….

Never too old to be stupid

One thought on “Nightmare In The Sun”