PILLOW TALK —–first and best of the three Doris Day-Rock Hudson comedy favorites, this 1959 frolic was the 6th most popular movie that year, grossing $22,200,000, making it Day’s most successful film, Hudson’s 2nd after Giant. In its charmingly silly retro way, it reflects its hormone-hamstrung time, a teased stirring of the latent American sexual beast. The bubbles rose brightly to the Technicolor surface on screen despite the best efforts of the accursed Puritans among us. It changed the course of several careers, and influenced romantic comedies for years. Keep-it-to-yourself subtext runs throughout, the stars shine, fashion gets chic display. And it’s still funny a half-century later. *

“At least my problems can be solved in one bedroom. You couldn’t solve yours in a thousand!”

“Mr. Allen, this may come as a surprise to you, but there are some men who don’t end every sentence with a proposition.”

Producer Ross Hunter saw Day’s untapped sexiness and Hudson’s latent light comedy potential. Stanley Shapiro & Maurice Richlin’s script has a few elements that don’t date well: the clumsy, aggressive randiness of the character played by the charmless Nick Adams and the waste of Thelma Ritter as a boozy maid are hard-to-take artifacts. But Day, winning at 37, sparkles in a couple dozen Jean Louis costumes and earned her only career Oscar nomination, as Best Actress, cementing the Doris-as-pursued persona that would energize her fan base and deflate her with critics (like they had sex…).

It was the 33-year-old heartthrob leading man’s first go at comedy after 11 years in the business: he’d do nine more over the next decade. Some insider hay is made through dialogue that plays with the later revelations about Rock’s personal inclinations; it just adds to the mirth. He and Doris hit it off big-time. A huge assist comes from the fresh drollness of Tony Randall, team player par excellence and a natural born scene stealer.

“Well there are some men who… hmmm how shall I put it? Well they’re very fond of their mothers… They like to share bits of gossip… collect recipes.”

Doris’ Oscar nod lost to the bummer ennui of Simone Signoret in Room At The Top—about as much fun to watch as a tax trial—and the movie also received nominations for Ritter as Supporting Actress, Music Score and Art Direction, notably Hudson’s swank, touch-tone batch-pad and Doris’ garish revenge makeover of same.  It won for the (mostly) clever Screenplay. Noted for using split-screen, especially in the iconic bathtub phone chat.

* 1959 also witnessed assorted cheeks pinched in Some Like It Hot, Operation Petticoat and North By Northwest. Lest we senior-moment forget: Carry On Nurse, Come Dance With Me, Gidget, A Hole In The Head, But Not For Me and The Mating Game (funny Tony Randall again). ‘Serious’ sex (still heartily recommended) was brushed up against by the likes of A Summer Place, Anatomy Of A Murder and Room At The Top.  Bible-sex ‘begatting’ saw Gina Lollobrigida undulate like a shameless pagan in Solomon And Sheba.  Plus Angie Dickinson tempted The Duke in Rio Bravo. Next thing in this New Frontier and we’ll elect a Catholic for President!

** Canny producer Ross Hunter found a pulse when he laid it on lady Day: “You are sexy, Doris, and it’s about time you dealt with it…if you allow me to get Jean Louis to do your clothes, I mean a really sensational wardrobe that will show off that wild fanny of yours, and get some wonderful makeup on you, and chic you up and get a great hairdo that lifts you, why, every secretary and every housewife will say, ‘Look at that-look what Doris has done to herself. Maybe I can do the same thing’.”      Was this a great country, or what?

Yet another, less-visible, beneficiary of the pillow talking was director Michael Gordon, who had been blacklisted since 1951. His output after this was less-than-stellar, but at least he was allowed to work. For all the press around Otto Preminger and Kirk Douglas hiring Dalton Trumbo for Exodus and Spartacus, somehow Michael Gordon’s rehab got lost in the gush. A quote from Mr. Gordon: “Comedy is the most serious tragedy in the world. Play it that way and you can’t go wrong. If you ever think of yourself as funny, you haven’t got a chance.” His advice to the nervous Rock: “No matter how absurd the situations may appear to the viewer, to the people involved, it’s a matter of life and death. Comedy is no laughing matter.” 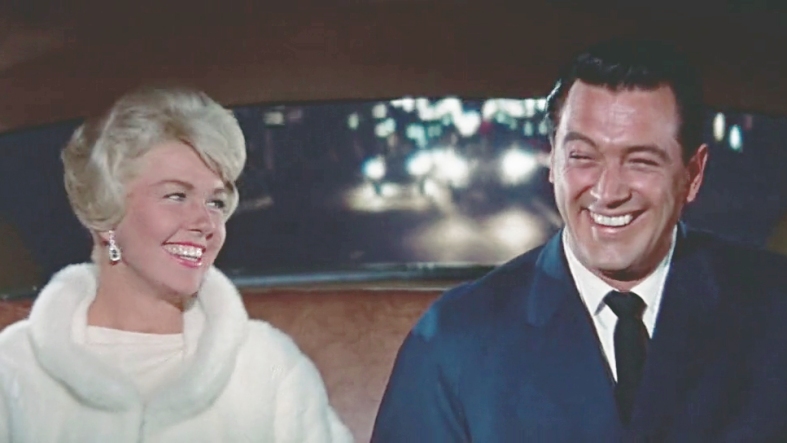 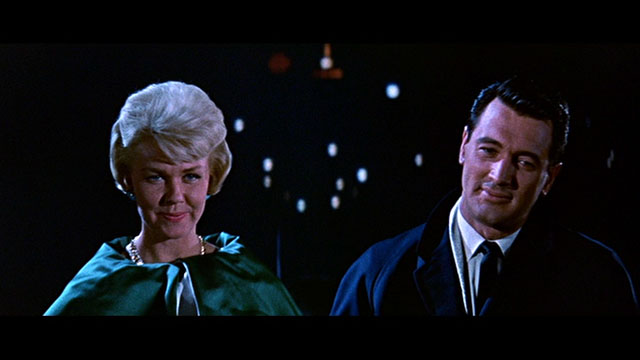