HARRY POTTER AND THE CHAMBER OF SECRETS —–#2 for Harry & pals in their second year at Hogwarts. Again directed by Chris Colombus & written by Steve Cloves, this one is even longer, the longest in the series, clocking 161 minutes. Leaving off the 9-minute credit crawl at the tail, that still makes for a two and a half hour “rollercoaster ride” that would please kids but leave many adults doing a lot of leg-crossing and shoulder shrugs on the way to the Harry-happy ending.

Someone wants to kill Harry (no, not deafened parents). First, they leave a string of ‘petrified’ victims strewn about the school, with young Potter poised for blame by the less-enlightened. Fear not, he has his friends and enough deus ex machinas to form a religion. Darker in tone than the first, battering on the senses with its loud action set-pieces, it’s too long and noisy, going for the “have-them-yell-throughout–eye-blurring-chase-scenes” arena of tomfoolery.  That whining ‘Dobby’ knob is a bit too reminiscent of ‘Gollum’ from those shorter, more violent folk in another part of mystical Britain. 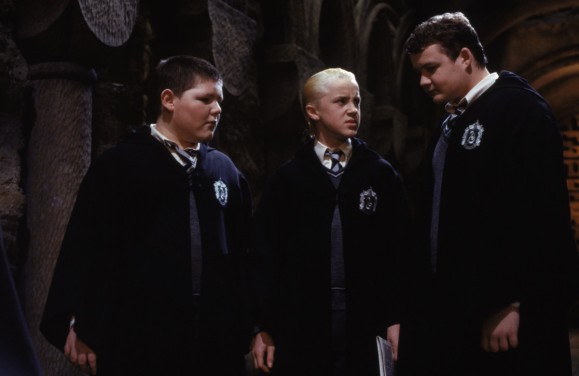 What works nicely are the rogues inhabited Kenneth Branagh, having a merry old time playing with the preening ego of the useless pretender ‘Gilderoy Lockhart’, and the contemptuous sneering of brat Draco’s father, ‘Lucius Malfoy’, splendidly put over by Jason Isaacs. The special effects of the ‘basilisk’ serpent and of the spider horde are an improvement over the first installment’s creations. The rest of the glove-fit cast and their array of accoutrement’s are fine and dandy, although I could do without the car (handy when needed, granted). Let’s take a pass on the whole barfing-slugs business—which no doubt kids just loved to death. Film deftly delivers a veiled anti-prejudice message with the aristocratic (or certainly well-off) “purebloods” vs. the ordinary middle or lower class “Muggles” or “Mudblood’s.”

Shaking the very societal foundations, it even beat the draw from the segment of Star Wars released that year. Second only to The Lord Of The Rings: The Two Towers among 2002s crop, the gob-smacking take of $878,980,000 would be enough to solve problems for a small country, yet those earnings rank low-tier 7th among the eight Harry adventures.   “Let’s just hope Mr. Potter will always be around to save the day.”

Speaking of rogues, it was the last film of Richard Harris, who died scant weeks before the release, somehow having made it through a quest to filter thousands of gallons of alcohol to a game but withered 72. He’d signed on to the Potter posting (after Sean Connery turned down an offer) because his 11-year-old granddaughter threatened to never talk to him again if he refused. Now that is a bloke.  It wasn’t Guinness or Vodka that finally claimed him, but Hodgkins disease. “In short, there’s simply not/A more congenial spot/For happily-ever-aftering/Than here in Camelot…” 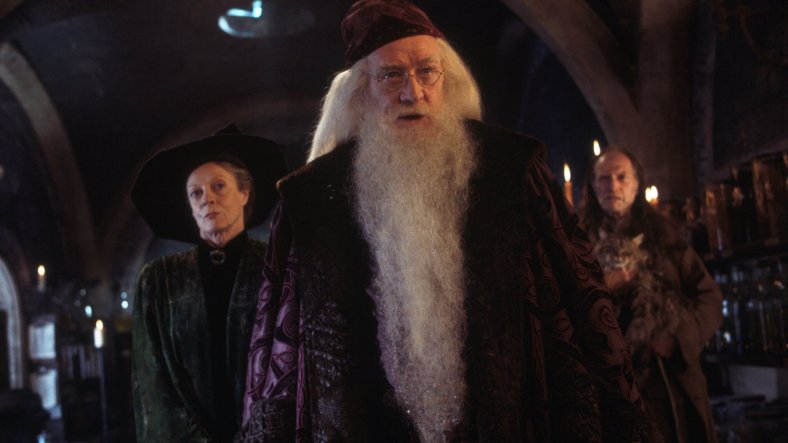