FROM HELL —–a literally ripping yarn, done up with style to spare, takes on the case of one of history’s most infamous fiends. Though his body count of unfortunates is eclipsed by too many others, the grisly acts of this mystery ghoul caught the rising tide of another atrocity—journalism as distraction via titillation. Whispered links to those frequenting  palaces rather than pubs fueled the speculative frenzy carved by “Jack The Ripper”.

“One day men will look back and say that I gave birth to the twentieth century.”

London, 1888. Over a short period, someone grotesquely mutilates a number of prostitutes in a squalid London neighborhood. A brilliant police inspector, psychic with an opium habit, (Johnny Depp) takes the case. Spun in circles by suspects and motives high and low, he finds a street-level ally in a comely streetwalker (Heather Graham) who feels she may be next-in-line. The cultured physician to the Royal Family (Ian Holm) lends his expertise. The public goes bonkers.  Gin consumption zooms, while the fog-shrouded alleys run red.

Working to suit the directorial flourishes of the The Hughes Brothers, scenarists Terry Hayes and Rafael Yglesias adapted their script off a graphic novel. While writer Alan Moore grouched dissent from the approach they took to his ideas, the movie works its blood-drenched way with a lurid fascination, and the production design is superior.  Directing, from the precociously talented 29-year old Hughes twins has Allen typically crafting what they seek with the actors while Albert wizards the technical aspects. Photographed by Peter Deming (The Cabin In The Woods), scored by Trevor Jones (The Last Of The Mohicans), it looks and sounds great. Editing, costumes and art direction are all first class. Gory, for sure (Jack was precise, but messy), but the sick carnage display is wisely kept just within bounds so you’re not so repulsed that you can’t enjoy the chills. 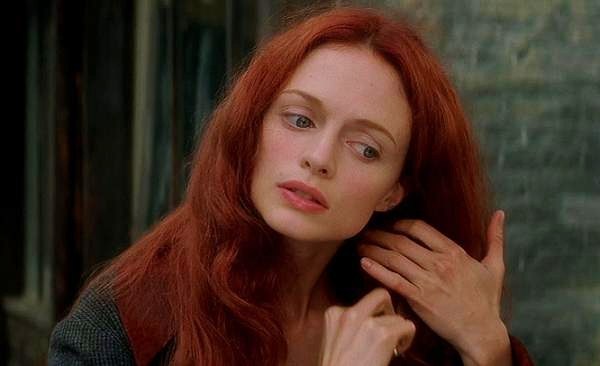 Cast is plum. Depp plays it restrained and contained (no fussy Farrow in this Jack tale); his pensive ‘Frederick Abberline’ is based on a real person, while his (fictional) Bard-quoting assistant is played by Robbie Coltrane so as to offer the otherwise grim story a valve release of dry humor. As ‘Sir William Gull’, Holm is peerless as ever: we’ll discreetly leave it at that.  Graham makes her ‘Mary Kelly’ intelligent and spirited, alluring and practical, a basically decent gal caught in a social-strata cesspool. *

* Inspector Abberline’s opium addiction was an invention: he retired with 84 commendations and awards, dying in 1929 at age 86.  William Gull was a real character, as was poor Mary Kelly. Like the charming Heather Graham, 30 here, Mary was also purportedly quite attractive, especially for the lower-end trade she plied and consorted with. She was 25 when she met her ultra-bitter end. The last of the famous ‘canonical five’ victims, Kelly and her working girl compatriots may have been joined by that many more. The mystery of Jack the Ripper was never fully solved. Speaking of monstrous, the ability of the highborn to get away with nearly anything and the cursed case of an irresponsible yellow press sowing discord are alive and kicking (us to death).