FAHRENHEIT 451—–“To learn how to find, one must first learn how to hide.” Ray Bradbury’s 358-page science-fiction novel about a dystopian American future, published in 1953, finally reached the screen in 1966, running 113 minutes, with the setting changed to Britain, performed by Austrian, British, Irish and German actors, directed by a 33-year old Frenchman who didn’t speak English. Though not a critical or popular hit at the time, its stature has greatly increased in the interim, with a loyal fan base struck by the unsettling vision of a cruel & vapid tomorrow, prescient enough about today’s draconian state surveillance and an apathetic, information-deprived populace trained to obey, hooked on trivia. No need to burn books when everyone’s attention-span is riveted to their cell-phone.

Adapting Bradbury, director and New Wave fave Francoise Truffaut wrote the screenplay with Jean-Louis Richard.  They jettisoned some of the strictly sci-fi aspects like the author’s “Mechanical Hound”, as well as the nuclear holocaust in favor of concentrating on a sterile atmosphere and alienated mood (pagination française nouvelle vague).

Truffaut’s friend and leading man from Jules and Jim, Austria’s 44-year-old exemplar of romantic weariness Oskar Werner is a seemingly right choice for the morose ‘Montag’, though I prefer Werner’s soul-deep sadness in the more conventional drama of Ship Of Fools. He may be a bit too removed here, since the egos and conceptions of actor and director clashed so much over interpretation that it ruined their relationship. * 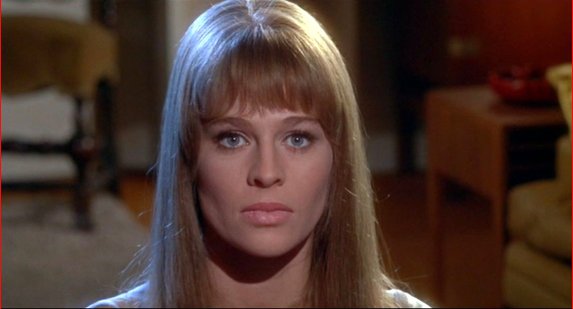 Julie Christie, the new Big Deal at 25 with Darling and Doctor Zhivago, plays dual roles as Montag’s shallow, suicidal wife addicted to pills, products and idiotic TV shows, and a chatty, book-loving teacher who holds the passion for ideas that the wife lacks. Critics knocked her at the time (some still do) but I think she’s fine.

Slyest, most forceful performance comes from Cyril Cusack who bites into his role as the securely sinister, self-satisfied Captain of the firehouse team Montag belongs to: his relish in destruction of ‘criminal thought’ plays like sick kindred spirit to the fundamentalist religious zealots who stalk among us.

The color camera work was done by Nicolas Roeg, and it’s hard to escape the poetic irony that the most visually alive shots in the film are his close-ups of the burning book pages, fire’s annihilating beauty counterpoint to the death of literature’s creative sparks. Truffaut manages to sneak a “Mad Magazine” into the pyre. Speaking of close-up perfection, Julie Christie’s complexion must have come from Olympus. 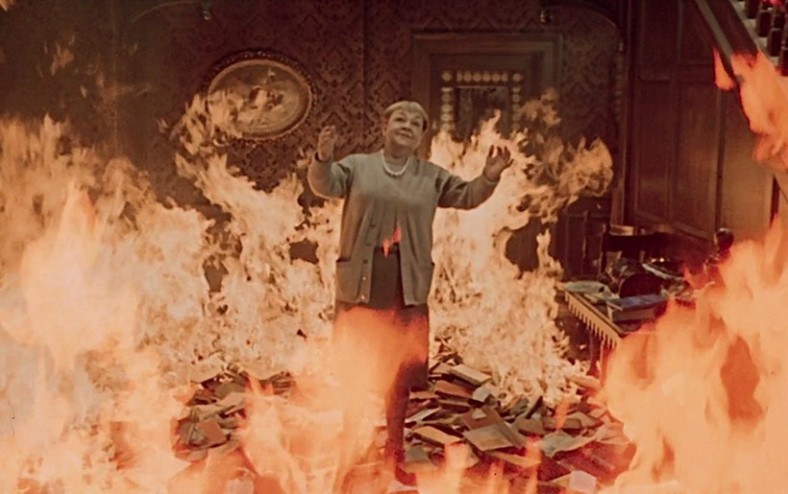 Sealing the deal is another soundtrack gift from the master of unease as dreamy delirium, Bernard Herrmann. Using only string instruments this time, his frenzied fire engine march gallops like fascism with a fever and the expression of solace and tenderness at the end feels like a requiem for vanishing grace.

The opening credits are spoken—disembodied and future-spooky—but film buffs know Francoise was beaten to the punchbowl by another precocious innovator, Orson Welles on The Magnificent Amberson’s, back in 1942. Filmed for $1,500,000, the take in the US only amounted to $2,000,000. With Anton Diffring (sneaky ‘Fabian’), Bee Duffell (dowdy defiant ‘Book Woman’ going up in a literal blaze of glory), Noel Davis & Donald Pickering (the two creeps on the wall screen TV—“What do YOU think, Linda?”) and Mark Lester, all of eight, two years before he became Oliver! 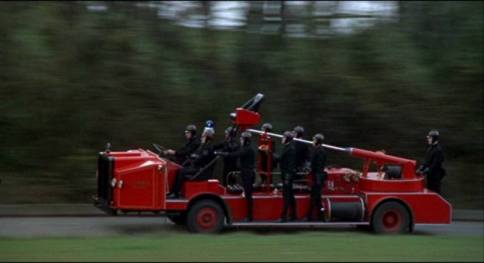 * Werner even changed his haircut at one point to deliberately mess with continuity (the film does have some fairly clunky editing issues) and Truffaut later wrote this was his “saddest and most difficult film-making experience.” They died two days apart in 1984, Werner 61, Truffaut 52.  Riddle me this, if books are banned and have been for generations, how does Montag know how to read?  Still, rough edges and all, the affecting film helped move the science-fiction genre another notch into the place where it would finally achieve respectability instead of razzes —the future. The only thoughtful competition in 1966 came from the superb Seconds, which was ignored. The fanciful Fantastic Voyage was a hit. Other pitiful entries limped: Around The World Under The Sea, Cyborg 2087, Daleks–Invasion Earth: 2150 A.D., Destination Inner Space, Dimension 5, and three lousy monster movies from Japan.