BENGAL BRIGADE is one of the slew of actioners Rock Hudson was crafted on/subjected to during the 50s, and not one of the more entertaining prizes in the basket. Brightly pretty in Technicolor, also unfortunately empty, dull, contrived and old-fashioned. Earning $4,100,000, this glided to spot #74 for good old 1954, a year that had more than its share of such simplistic action fodder. *

India, 1857. Revolt is stirring. After being court-martialled for disobeying pesky orders, capable ‘Captain Claybourne’ (Rock, sans a syllable of English accent) has choices to make. Loyalty to his hard-won native friends in the restive host country…or to The Regiment (well, the ‘Brigade’) and the fluttering, bullet-pocked Union Jack?  On the Brit end of the swagger stick, there’s shocked and saddened Arlene Dahl, Torin Thatcher and Dan O’Herlihy. Closer to Krishna & Kali, there’s gorgeous Ursula Theiss, with skin darkening makeup highlighting her already potent visage, crafty Arnold Moss (it’s in the regulations:don’t trust a foreigner with a goatee, especially when he insults you at a palace dinner) and jack-of-many-exotic-tribes Michael Ansara.  Can’t the accursed milling subject people’s of the subcontinent learn to accept polite, brightly costumed foreigners blessed with Good Intentions & Maximum Firepower? Must lessons be taught, yet again, at cost? Front rank, present! Fire! 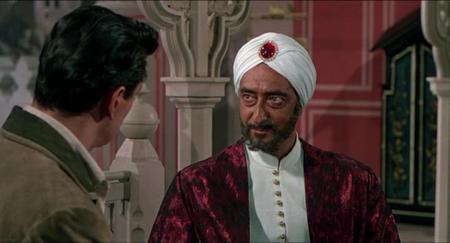 The director, Laslo Benedek, was coming off the successes of Death Of A Salesman and the controversial The Wild One, so this dross must have felt like a demotion from Lieutenant Colonel to Sergeant.  Co-star O’Herlihy copped a surprise Oscar nomination the same year for his superb job as Robinson Crusoe, yet he never became a star (maybe didn’t care to, working steadily from 1947 to 1998). Like the dreamy Theiss, Dahl photographs nicely in the crisp color. Hudson labors. **

None are helped by dialogue like “A man belongs to those with whom he has eaten his first salt.”  Along with making a weak salute to sugar-coated colonialism just seven years after India finally sent the redcoats back home to vent pronunciation on the Irish, the tired screenplay retreads the previous year’s Raj rouser, the exciting King Of The Khyber Rifles. That epic tramples this over-ripe jackfruit into the dust: if you want to shame Sepoy’s over cartridge coating, get Tyrone Power.

With Leonard Strong, Sujata & Asoka. Yes, there is a tiger. 87 minutes.

* Tossing lead, spears, arrows, logic and diction in every direction over 1954: Vera Cruz, Demetrius And The Gladiators, Hell And High Water, The Black Prince Of Falworth, Apache, Drum Beat, Garden Of Evil, Prince Valiant, Sign Of The Pagan, Green Fire, King Richard And The Crusaders, The Black Knight, Beachhead, Ride Clear Of Diablo, Siege At Red River and last but not least Taza, Son Of Cochise, with Rock as guess who?

** From Ursula Theiss: “Arlene’s dressing room was next to mine, and I heard her say, in an agitated voice, “If I’d known that woman was in the cast, I never would have signed the contract!” When I confronted our mutual agent, he said, “Don’t worry about it. It’s just professional jealousy. You’re just too pretty to share the screen with”. As for Rock, he was a sensitive, cooperative young man, ready to give a helping hand. He showed…a great admiration for character actors, possibly feeling trapped in his good looks. I appreciated his ever-present gallantry.”