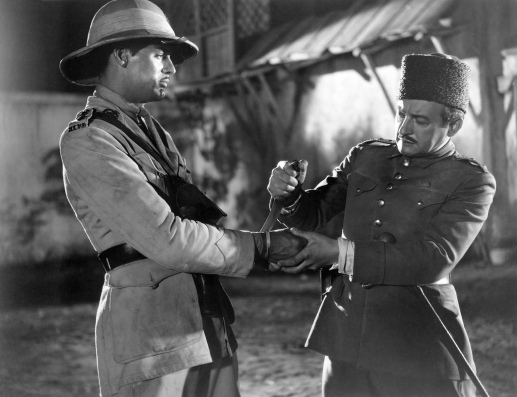 THE LAST OUTPOST is listed by Cogerson as coming in 104th place among box-office scores for 1935; this forgotten relic is of fleeting interest mainly for the presence of its two stars in the early part of their film careers, Cary Grant and Claude Rains. Grant, 31, handsome to a fault (here with a Gable-esque ‘stash) was still mastering the craft.  Rains, 46, fresh from The Invisible Man, easily out-acts him, but with the dopey material they’re given here, the plaudit doesn’t count for all that much.

World War 1 in the Mid-East & Africa. Escaping the Kurds & Turks, Brit officer Grant and undercover agent Rains help a tribal people flee across rivers and mountains to evade massacre. Recovering in a Cairo hospital, Grant falls (about as quickly as it takes to read this) for his nurse (Gertrude Michael), who, we shortly find out, is married to Rains. Claude not only saved Cary’s life (twice), he has an understandably short temper when it comes to surrendering his wife to the guy. A pal’s a pal, but…

Daffy action moves to the Sudan, where the “Fuzzy Wuzzie’s” (still operating years after their post-Khartoum rampaging?) are raising havoc, and to enact revenge, Rains follows Cary into the fray. Will duty get in the way of payback? Does the “jungle” in the Sudan suddenly open up, in the matter of step or two, into sand dunes? Is the love dialogue patently ridiculous? Will British colonial cavalry show up in the nick of time? *

Of note is the liberal use of footage spliced in (it’s not a lavish production) from the classic 1925 documentary Grass, depicting the stunning tribal migration, of massed warriors from the 1929 version of The Four Feathers and in assorted clips of stampeding elephants, baboons and hippopotamuses. Ever see a herd of hippos plonk off a ten-foot bank into a river? Here’s your chance. 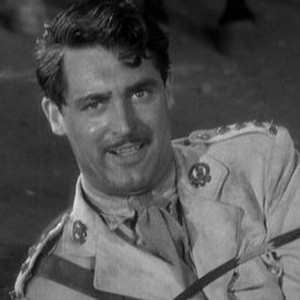 The non-lifted scenes are decently photographed by Theodore Sparkuhl. Lame direction of the insipid romance and clumsy action was shared by Charles Barton and Louis J. Gasnier. Barton could later include Abbott & Costello Meet Frankenstein among—and the best of—his credits while Gasnier’s next effort was the infamous idiocy Reefer Madness.

76 minutes worth, with Akim Tamiroff (uncredited, the last of 14 assignments that year), Kathleen Burke (our ‘Panther Girl’ friend from Island Of Lost Souls, this time with no claws) and Billy Bevan. Perhaps the ad blurbs will draw you in: “Men of steel in an empire of fire!” and “They wanted an assignment in Hell…and a woman gave them the job!”

* The movie blithely shafts the ever-beleaguered Kurds, who, though a few cavalry units worked for the Turks (allied with Germany), the historical reality had Ottoman Turkey deporting as many as 700,000 Kurds from their traditional homeland, half dying. Those co-opted who stayed “loyal” to Constantinople were used to help slaughter Armenians, not harry the tribe ‘rescued’ by Cary & Claude here.