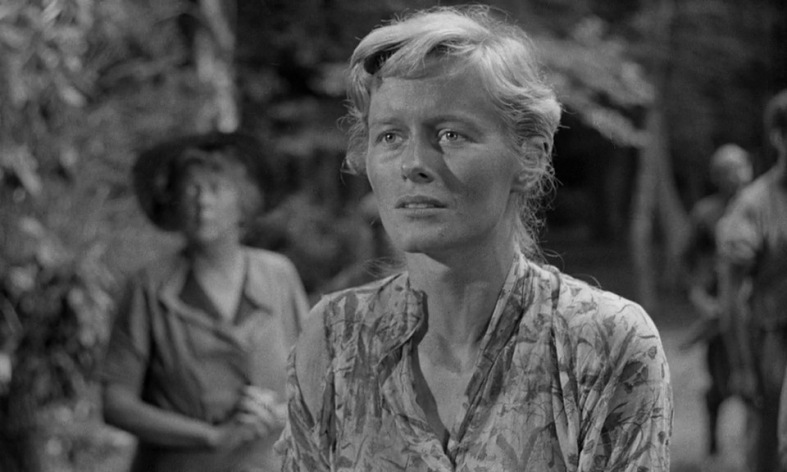 A TOWN LIKE ALICE  wrings a deep emotional response from its harrowing story and cathartic resolution, and throughout its 111 minutes is beautifully acted by Virginia McKenna, Peter Finch and a well-picked supporting cast, directed by Jack Lee. The 1956 survival drama was a big hit in Britain, Europe and Australia; it made its way to the US two years later under the garish title The Rape Of Malaya. Remade as a highly successful TV series in 1981, it comes from Nevil Shute’s 1950 novel. *

Returning to the village that hid her during WW2, bringing them the gift of a much-needed well, a woman recalls the events that brought her there, when Japan’s victorious army swept through Malaya in 1942, defeating and enslaving the British. With the men in prison camps, the ex-pat wives and children who didn’t make it to confinement in Singapore are shuttled back & forth across the hills, jungles and swamps in what amounts to an extended Death March, with each local Japanese command refusing responsibility for the increasingly desperate group. A natural leader emerges in ‘Jean Paget’ (McKenna) who bonds with Australian soldier ‘Joe Harmon’ (Finch), used as a mechanic and driver by the enemy. Joe’s purloined supplies and stories of his home town help imbue Jean with hope to guide her fortitude as conditions worsen. Who survives becomes a matter of fate as much as faith, luck rather than logic.

Second-unit crews filmed in Malaya (Malaysia) and Australia to provide the backdrops while all close-in work was matched up back in England. Veteran screenwriter W. P. Lipscomb (A Tale Of Two Cities) finessed the adaptation, with assist from Asia hand Richard Mason (The World Of Suzie Wong). Episodes, incidents and fleeting offhand moments illustrate pathos, anguish, dignity and humor, cruelty, pride, despair and compassion.

The story plays it fair by showing the assorted levels of behavior,  admirable & inspired, petty & cruel, from both sides (Kenji Takaki is memorable as the humane guard assigned to wearily shepherd the exhausted flock thru their treks). Surprising in its reversals and reveals, it’s an intelligently layered display of human fragility, weakness, grit and devotion. 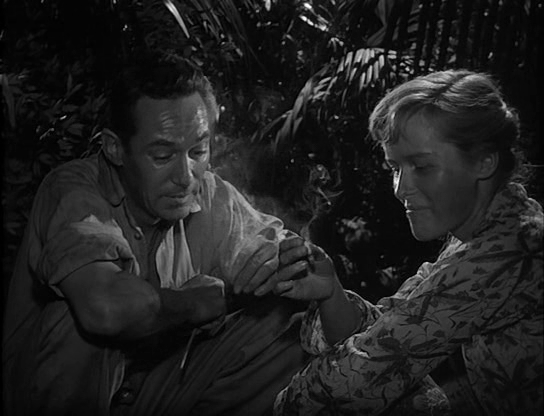 Finch is disarmingly likable and unmannered, and Virginia McKenna is a bright beacon of spirit. Sweat-soaked, mud spattered and sunburnt, she’s more beautiful than ever. It’s a marvelous showcase role that she wisely underplays so it doesn’t become showboat. She doesn’t make a single false move–you really pull for the character, and fall for her, too. Their scenes together touch the heart. 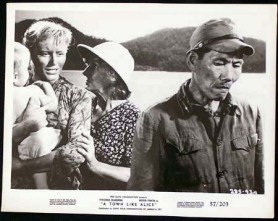 Apart from one little overdone, off-kilter bit of comic injection, the music score from Matyas Seiber is a winner, its lovely theme especially moving at the finale. Have a tissue on hand.

* The film covers only part of the 368-page novel, trimming the early section and leaving out the last half (the TV series fills that in). Though fictional, it’s based on true events which befell Dutch civilians in Sumatra, although any number of dislocating miseries were inflicted on captives and occupied populations throughout SE Asia. It was a major boost to the careers of 24-year-old McKenna and Finch, 39 at the time, with both receiving BAFTA awards for Best Actress & Actor. Numerous movies deal with being a WW2 POW held by Imperial Japan: the subset dealing with women includes 1950s fine Three Came Home (Claudette Colbert) and the pretty good 1997 entry with Glenn Close, Paradise Road.  There was also a BBC series, Tenko, that ran between 1981-85.