SEANCE ON A WET AFTERNOON ——the British Invasion surged ashore in 1964, loosing a host of performers and productions either directly from or revolving around England. Perched quietly among the flashier items was this superior, low-key adult suspense drama featuring two of the year’s best performances. It wasn’t destined to be any kind of box-office grabber, but critics applauded and it nabbed a Best Actress nomination from the Oscar’s; it should have secured one for Best Actor as well. *

‘Myra Savage’ (Kim Stanley) practices as a medium in the London home she shares with her unemployed husband ‘Billy’ (Richard Attenborough). Childless, they clearly care for each other, but Myra dominates the weak-willed Billy, steering them into a scheme to bring renown (hence money) for her supposed talents. All they have to do is kidnap a child (Judith Donner, 11), hold her until they can “solve” the crime, then reap the rewards. Trouble is, aside from the obscene and illegal part of the deal, and past the nervous Billy’s qualms, Myra’s cold calculations seem to cloak some deeper kind of mental aberration. Things might go not quite as planned. Then what?

“Billy, what do you know about children? They’re really quite adaptable, children. They’re like… like, err, little animals. You know how animals look in the pet shop. In the windows when you see them? You take them home and you feed them and they adapt in a matter of hours.” 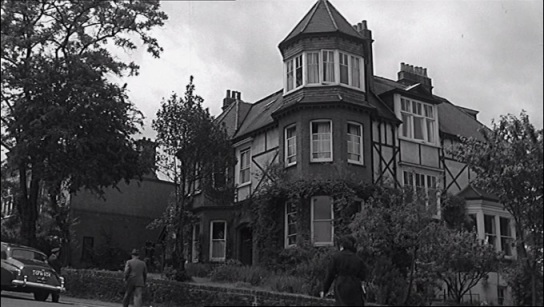 Attenborough, 41, popular in Britain since the 1940s, had just scored international recognition with his calm commanding of The Great Escape. He co-produced this sleeper with Bryan Forbes, with whom he’d partnered on the well-received dramas The Angry Silence and Whistle Down The Wind. Forbes then directed as well as scripted the tightly wound, atmospheric 115 minutes, off a 182-page 1961 novel by Mark McShane.

Kim Stanley at 39 was highly regarded for her stage and TV work, but had only made one film, 1958’s The Goddess (she did the brief narration for To Kill A Mockingbird).  Smart, compassionate and unsettling, shot in appropriately chilly black & white, it also benefits from a casually mod yet eerie score from John Barry, all over the scene that year with his more grand-scale enhancement of Zulu, From Russia With Love and Goldfinger.

Stanley and Attenborough are…flawless; a sad, gripping portrait reveals a warped, mutually reinforcing loop of unreality, a cracking marriage in tightly controlled demolition; they are like demure cousins to ‘George & Martha’ from Who’s Afraid Of Virginia Woolf?—minus the booze and swearing, but just as doomed, singly and as a pair.  Stanley is best-remembered for this stunner role (watching her, her every move is fascinating: you can’t help but think of how another more famous ‘stage actress’ like Geraldine Page would have overplayed this into Ticville)–and, disdaining the medium of film, she wouldn’t do another for 18 years, and then only one more after that.  Attenborough smacked another home-run the same year with Guns At Batasi, his bombastic retrograde colonial sergeant in Africa the diametric opposite to the emotionally kind but spiritually defeated husband in this brooding tale.

Little Judith Donner as the kidnapped girl was a lucky choice: other roles are quite ably handled by Nanette Newman, Mark Eden, Patrick Magee and Gerald Sim. A gem.

* Julie Andrews won Best Actress for her delightful Mary Poppins, but they should have saved it for next year’s The Sound Of Music. Debbie Reynolds was a token nominee, hamming the dickens out of the awful The Unsinkable Molly Brown (she was vastly better the previous year on How The West Was Won). Stanley’s real competition came from Anne Bancroft and Sophia Loren, both wonderful as beleaguered wives in The Pumpkin Eater and Marriage, Italian Style: hard choice if you’re trophy voting—I’d split dif ‘tween Kim and Sophia.  Attenborough should have at least been on the roster, replacing Rex Harrison, given a career-thanks Oscar for My Fair Lady.  The other gents on line were Burton & O’Toole for Becket, Quinn as Zorba The Greek and a triple-threat Sellers in Dr. Strangelove.  Attenborough earned a deserved Supporting Actor nomination two years later for The Sand Pebbles.  Stanley was again nominated for her 3rd appearance, doing brilliant supporting work as the horrid mother of Frances. Her next, 4th, last feature film was 1983s The Right Stuff.  Often tagged as “the female Brando” (whatever…), as with another stage legend, Paul Scofield, moviegoers lost out that this astoundingly good actress played skittish with the big screen. She passed away at 76, in 2001. Lord Richard Attenborough, KT, CBE went in 2014, at 90.