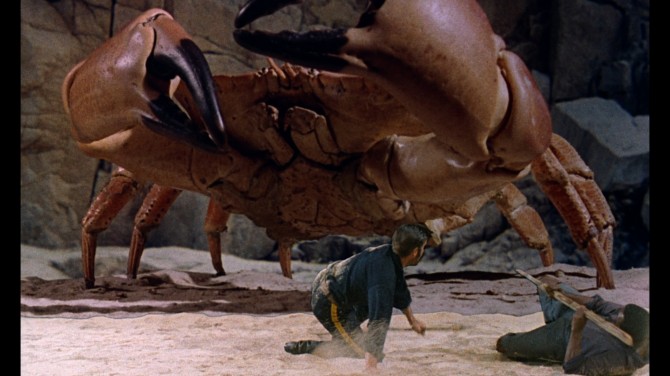 MYSTERIOUS ISLAND—– now we’re talkin’. Being allergic to their sting, and as a kid duly  freaked out by bees, this made a huge imprint on my six-year old psyche in long-ago 1961. I’d already been prepped for dinosaurs thanks to the dimetrodons in Journey To The Center Of The Earth and via The Lost World. with its lava-dwelling fire monster, but when a needle-tailed bug the size of a station wagon showed up here it locked in creature appreciation for a lifetime.* 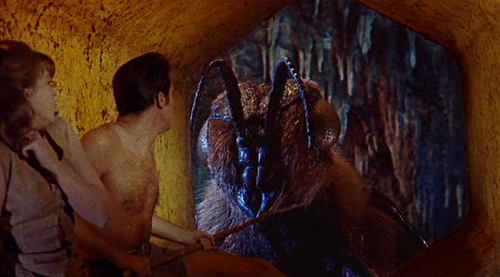 “This was just the beginning. We escaped, but only into the clutches of the greatest storm in American History. Below us, when we could still see through the patches of angry clouds, were smashed cities and forests torn up by their roots. Then finally, the earth disappeared from our view. We were prisoners of the wind, helpless in the storm’s mighty grip. And we wondered, how much longer we’d remain aloft. Would we ever set foot on the earth again?” 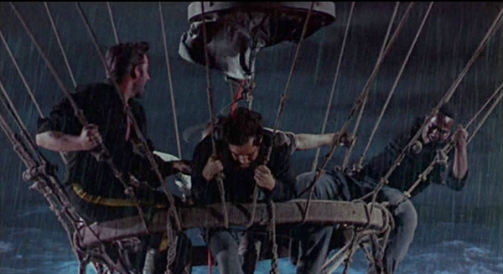 Four Yankee prisoners and a hostage Rebel guard escape from Richmond’s Libby Prison in an observation balloon during the Civil War bombardment of the city. Caught up in a once-in-a-century gale, they’re blown clear across America, out into the vastness of the Pacific, onto a lost tropical isle, up there with the Swiss Family Robinson’s paradise in terms of lushness, but just a wee harder to stay alive on. 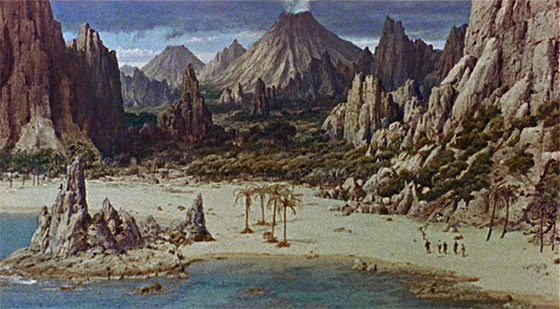 To be sure, there are shipwrecked ladies to keep them company.  But there is also an awesome array of wonderfully over-sized critters that call forth all the bravado the little group can muster. A crab as big as a dump truck, honey bees larger than elephants, a prehistoric chicken (yes!), and the ever-popular giant squid.  These challenging pets are the work of Capt. Nemo, the first in fantastic fictions long line of bitter, unappreciated scientists. And pirates, and a volcano, and—what a fun movie, beautiful in color, with imaginative art direction, breakneck pacing and an engaging cast.

Michael Craig makes a stalwart leader, ‘Capt. Cyrus Harding’; Gary Merrill has a good time as the cynic of the group, war correspondent ‘Gideon Spillett’; Michael Callan, in the midst of his buildup, is likable as the young crowds rep (he was 26).  Familiar British bruiser Percy Herbert doesn’t fare too well with his Southern accent and Guyana-born Dan Jackson tags along mostly to be hardy.**

The conveniently shipwrecked damsels are Joan Greenwood, she of the incomparably modulated voice, and Beth Rogan, voted Best Castaway Legs,1865 (her eventual costume design about a century ahead of her Victorian sisters).  Herbert Lom takes on the role of Nemo in the face of James Mason’s 1954 turn and draws his own picture of cultured but desolated intellect run amuck. 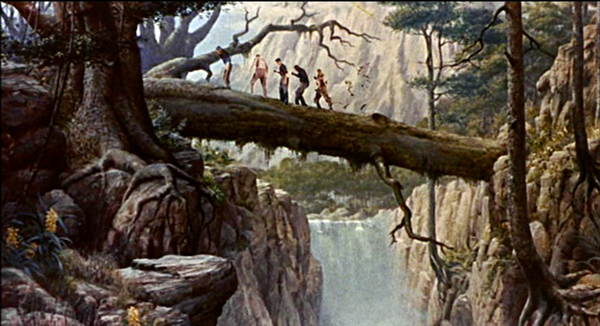 People-scheeple, how about those monsters?  The stop-motion models constructed for the special effects are treasured examples of the great Ray Harryhausen’s genius. That mega-chicken (as most people took it) is a facsimile of the prehistoric ‘Phorusrhacos’, so do practice pronouncing that in order to show off when discussing this with other fans.  A most icky bit of business with the bees (other than their just being…bees) comes when one of them traps Callan and Logan in a hive cell and seals them in: a transcendently yucky scene.  The clueless Academy Awards dweebs did not deign to even nominate Harryhausen’s work, giving the Special Effects Oscar to the higher-profile The Guns Of Navarone.  Shame lingers. 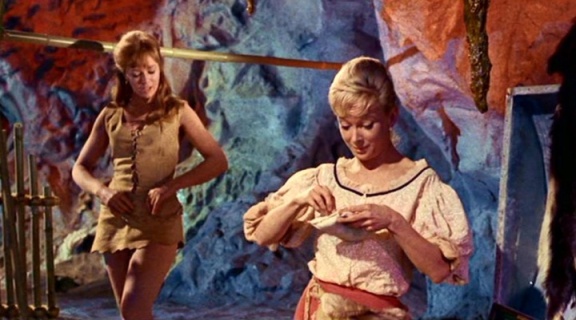 Directed by Cy Endfield, shot partially at Sa Conca Bay on Spain’s Costa Brava, whipping past in 101 minutes, the script naturally plays havoc with Jules Verne’s 1874 novel, a sequel to 1867s “In Search Of The Castaways” that mixes in Nemo and his sub from the 1870 “20,000 Leagues Under The Sea”.  The mutant creatures in the movie are pure 1961. Grosses in the States came to $2,600,000. While the next adventure epic on tap for director Endfield was the down-to-earth Zulu, Harryhausen, producer-partner Charles H. Schneer and their composer set out to dazzle with Jason And The Argonauts. 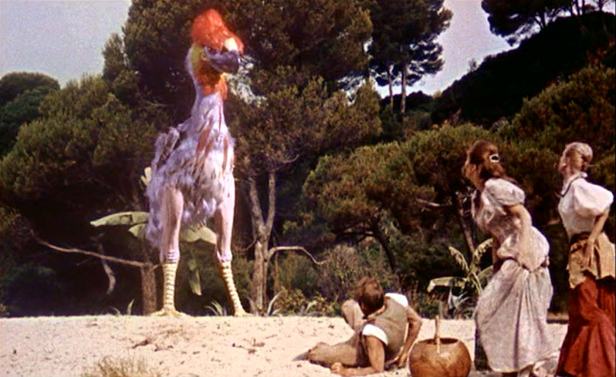 Wrapping around all the excitement is a monumental musical panorama from Bernard Herrmann. With apologies to the esteemed Jerry Goldsmith and John Williams, no other composer has ever been able to match his sweeping aural descriptions of things no one will ever see but on a screen. From Sinbad’s romantic sojourns to Jason’s search for the Fleece, Prof. Lindenbrook’s trip beneath the Earth or the Hitchcockian descents into the macabre, it was the music of Bernard Herrmann, thunderous or chilling, eerie or enchanting, that unified the daydreams or nightmares into something magical and his symphonic tidal wave for Mysterious Island is worthy of the dreams of old Jules Verne himself. 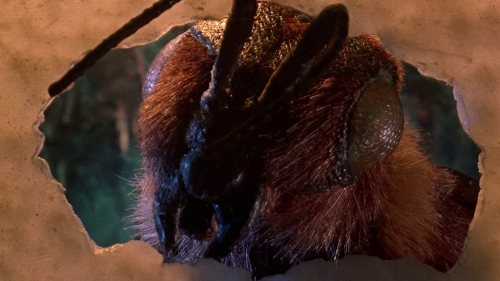 * Smugly, the immune simper “Why bees, silly”?  I suppose it could be the idea of a furry alien that makes a weird noise, has compound eyes, mandibles for a mouth, a burning tail, and is airborne that seems maybe less fun than a kitten. Apart from insect triggers, this movie compels a salute not just to its makers but to the guy who took me to see it many moons ago: my father.  Dad didn’t have much use for science-fiction or horror stories, as they were not grounded in reality, but he did appreciate imagination and knew kids needed to exercise it to ready themselves for the unknown avenues life would bring. He read Verne’s tales on his way up, and felt the daring and wonder they instilled were vital, so he patiently endured Ray Harryhausen’s feast of crab, chicken and squid, trusting that his astonished little boy would figure which exploration paths to follow. Of course, next year we saw the non-fantasy adventure of Mutiny On The Bounty, and its lines of smiling Tahitian beauties hip-swishing under the palm trees added wanderlust (& her friends) to my lunchbox, but that’s another story…. 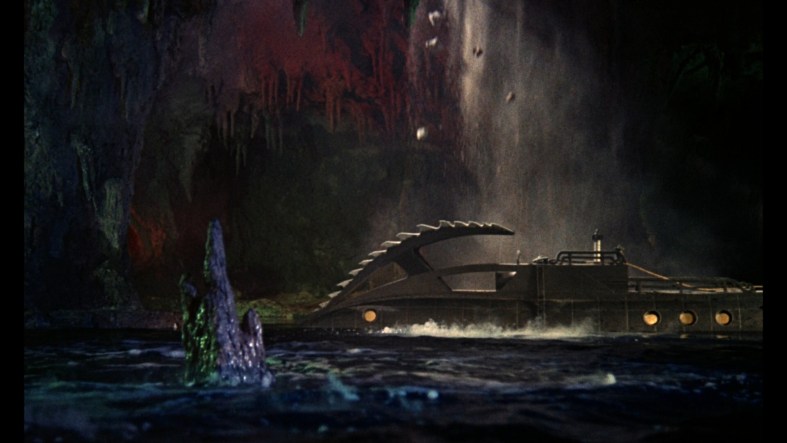 ** A nice bonus human interest byline: searching through the comments section for this film on the Internet Movie Data Base, several children of the late Dan Jackson connected with siblings they’d never met. Adventures of the soul.