JASON AND THE ARGONAUTS  concludes with Zeus’ benevolent “For the moment, let them enjoy a calm sea, a fresh breeze and each other.”  Fair enough, bolt hurler, after all the trials Jason and his by-then decimated crew have gone through on the perilous path to Colchis.

The beloved Harryhausen-Herrmann telling of the Bronze Age heroes search for the Golden Fleece came out in 1963. That’s when I first saw it, age eight: my big sis took me to a matinée. At 29, a sophisticated, stunning beauty, spending the afternoon watching monsters and sword fights was probably low on her wish list, but she loved me and had brat-duty that day. Tradeoff was I had to squirm through a ‘grownup movie’ of her choice. Myth through the hour-glass, I’ve forgotten what it was, but such ever mushiness it icked was worth it, because I can still recall the thrill of seeing Jason and Co.—including Hercules!—battle their way through a host of outsized foes.  No matter how many revisits over the years the glow from its adventure-charm and creative skill hasn’t diminished.

We genuflect to Harryhausen-Herrmann, because even though the handsome $3,000,000 production, made with a fine, predominately English cast on scenic, sun-drenched Italian locations was ably directed by Don Chaffey and boasts a literate script from Jan Read and Beverley Cross, its classic status with fantasy fans mainly derives from the genius of Ray Harryhausen’s stop-motion special effects creations and the enhancement of Bernard Herrmann’s powerful, galvanizing music score. The 4th collaboration between the two men, their 20th-century gifts bring a 2,400 year old epic, previously familiar only to students of mythology or antiquity, to life for millions less scholarly or privileged. With monsters!

“Zeus, I was a sinner. I’ve never tried to deny it. But I didn’t sin every day. Why then do you punish me every day?

25-year-old Todd Armstrong’s career had been going nowhere in particular when he was picked to fill the sandals as Jason. He fits the physical picture of a hardy voyager quite well (anyone ever notice how unusual it was to have a hero with a beard?), yet the decision came down (from Colombia’s version of Olympus) to have his American accent dubbed by British actor Tim Turner. Why is a guess, as Turner’s voice job sounds like an American anyway. Backing the photogenic star is a rock-stalwart lineup of Britons who know their way around classical pronouncements. On board the Argo are the sturdy Laurence Naismith as the builder of the vessel; Gary Raymond as the taunting ‘Acastus’ (Raymond was hot at the time with The Playboy Of The Western World and El Cid ) and the great Nigel Green (Zulu) as Hercules. A rugged 6′ 4″, Green’s impersonation of the titan doesn’t rely on a rack of showy muscles ala Steve Reeves, but on a natural, good-humored, lusty brawn. His Hercules doesn’t overawe: he just seems like a great guy to have on your side in a fight.

Observing the frail and faulty humans from way, way above are Zeus (the superb Niall MacGinnis) and Hera (Honor Blackman, 37, just about to claim earthbound immortality galore in Goldfinger). A neat effect is having their teasing Olympian conversations given a slight echo, somehow fitting for the sky palace perch of “The Gods”.  The hotcha Princess Medea is played by Nancy Kovack, who gets to bend herself pretzelish in a fairly erotic dance number to the drums and woodwinds of Herrmann’s insistently seductive scoring. They dubbed her voice as well—imagine how she and Mr. Armstrong felt, as they didn’t know this had been done until they watched the premier!  Though kids ate this up, the screenplay doesn’t dumb things down, so spirited adults can also enjoy the chatter between the visual showstoppers.

Fleece blockers? First there’s a run-in with—and away from— Talos, a gigantic bronze statue roused to life, angered by Hercules nabbing a javelin belonging to the deities. The scene of Talos’ head turning, with accompanying metallic groan sound effects is a prime fantasy genre jewel. Luckily, the big mad hulk has an ankle problem. Next are a pair of devilish harpies, half-man/half-bird, tormenting a blind fellow who, rescued from these delightfully hideous creatures, advises Jason on ‘The Clashing Rocks’. That episode then brings up, literally, Triton, the sea god. He doesn’t say much. After some palace partying (with that sexy dance number) comes a showdown with the writhing 7-headed Hydra, guarding the glittering Fleece. Finally, things boil down to “Rise up, you dead, slain of the hydra. Rise from your graves and avenge us. Those who steal the Golden Fleece must die.”  This curse summons a squad of skeleton warriors to emerge from the soil and attack Jason and his men, Harryhausen’s most astounding achievement. Running three minutes on film, the sequence took four months to film, frame-by-frame. How the Academy Awards nabobs ignored this triumph is one of Oscar’s great flubs. Not even a nomination! For shame.*

Bow to stern, the Argo‘s dauntless adventurers and their fearsome enemies are propelled by Bernard Herrmann’s awe-invoking soundtrack. Except for a harp, he dropped the string section this time, and relied on thirty six percussion players and an array of instruments including the glockenspiel, xylophones, tambourines, and a triangle. Heroic brass (French horns, quad tubas) and the swoop and dive of selected wind instruments set mood, back action, raise hackles. Woodblocks and castanets help those grinning soldier skeletons rattle. **

Colombia didn’t market the film with much grace and lordly critics of the day casually lumped it in with the glut of doofy sword & sandal pap showing up from Italy, so the film only reached 49th place in ’63, grossing $6,000,000 (a little less than Beach Party, a bit ahead of Gidget Goes To Rome).  With Michael Gwynne, Douglas Wilmer, Jack Gwillim, John Cairney, Patrick Troughton and John Crawford. Wilkie Cooper manned camera. ***

* They gave the Oscar for Special Effects to Cleopatra. The other nominee was The Birds. Both excellent jobs, but also on higher profile, “respectable” pictures. As with Mysterious Island, Harryhausen was robbed, again (1963s picks went to Hades in a handbasket on several counts).  Industry backslapper gaffe aside, it’s no doubt many/most kids and young adults who are cajoled by their parents or grandparents—yikes!—to sit still for Jason and other vital classics from olden days might wonder “what the fuss”, and giggle or shrug over the dated technology, now the realm of CGI magic. Sigh. You had to be there–and a few of us never fully left. Fine by me. Fresh mead for my stunt double!

** Resenting their producer Charles H. Schneer’s stinginess, this assignment ended Herrmann’s association with Harryhausen, after pooling talents on The 7th Voyage Of Sinbad, The 3 Worlds Of Gulliver and Mysterious Island.  Schneer & Harryhausen followed this up with the cool First Men In The Moon, which was lucky to get a great soundtrack from Laurie Johnson. Herrmann’s next was Marnie, his last of seven completed scores for Alfred Hitchcock: they were also on their way to a falling out. Later Harryhausen-Schneer fantasy outings showed that the public wanted to see more ‘Jason’-style rousers. They all made more money, but none are very good: The Golden Voyage Of Sinbad, Sinbad And The Eye Of The Tiger and Clash Of The Titans (somebody kill that frickin’ owl) can’t row an oar to the earlier films. FYI, Colchis is located on the Black Sea coast of Georgia. 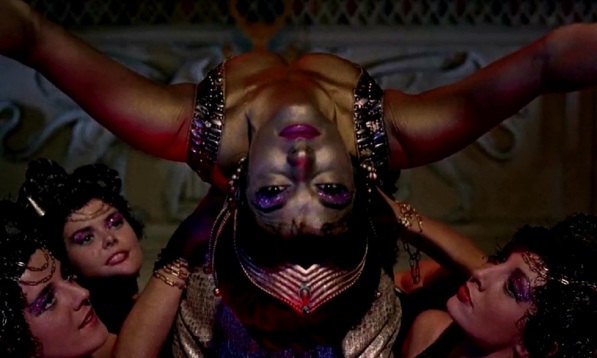 *** Notes on the cast, happy and sad.  Laurence Naismith, ‘Argus’, was Capt. Smith in A Night To Remember and later helped Sink The Bismarck!  He also held Black Belts in judo and karate, and retired to run a pub in Australia.  John Cairney, ‘Hylas’, who made the mistake of entering that “treasure chamber of the Gods” with Hercules, has logged over 50 years as an actor, writer, painter, lecturer and recitalist, internationally lauded for his one-man shows.  John Crawford, ‘Polydeuces’, wielded a Persian-bound sword a year earlier as one of The 300 Spartans.  Michael Gwynne, ‘Hermes’, spent WW2 as a major in the 2nd Nyasaland Battalion of The King’s African Rifles.  Douglas Wilmer is a favorite from playing El Cid‘s loyal Moorish ally ‘Al-Mu’tamin’. 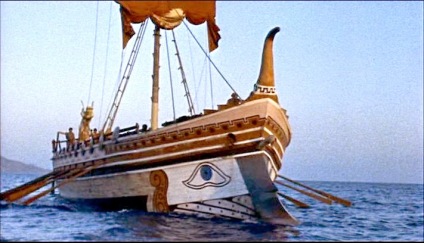 He lived to be 96.  Patrick Troughton, ‘Phineus’, had a nervy, decorated combat record and later capered in 126 episodes as Doctor Who. He was also that unlucky priest impaled in The Omen.  Jack Gwillim, ‘King Aeëtes’, was formerly a Commander in the Royal Navy and had been a champion boxer and rugby player.  Boy kids of the 60s know Gary Raymond from 58 episodes of The Rat Patrol.  Nancy Kovack married Zubin Mehta. Nigel Green died at 47 from an overdose of sleeping pills.  Todd Armstrong was injured in 1992 and became addicted to painkillers. 55, he shot himself that same year. He deserved a bigger career and certainly a longer life, but he will always live in memory as the intrepid Jason.   The beautiful Honor Blackman left us for Olympus in 2020, at 94. Honor offered “Most of the Bond girls have been bimbos. I have never been a bimbo.” Damn straight, Ms. Galore. 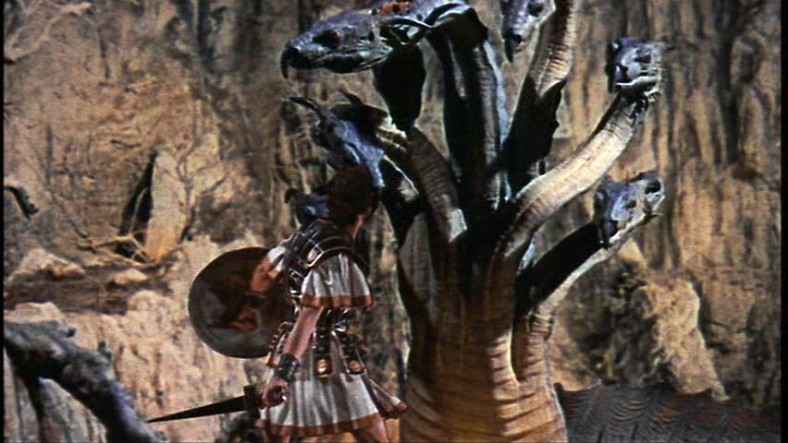 4 thoughts on “Jason And The Argonauts”