THE MAN WHO SHOT LIBERTY VALANCE—- “when a movie becomes legendary, print the facts.”  Listen, Pilgrim, what this 1962 classic ‘means’ has been talked to death from here to Shinbone, so we’ll do what Tom Doniphon would: tell high-minded smartypants to pick up that 3-pound steak while we cut to the chase (and boot a giggling hyena cur in the teeth).

An esteemed politician and his wife visit the frontier town of their younger days to attend the funeral of an old friend, who died a pauper. Simple enough. In flashback it’s revealed how young ‘Ransom Stoddard’ (James Stewart), met ‘Hallie (Vera Miles) and ‘Tom Doniphon’ (John Wayne). The town was plagued by a murderous outlaw (Lee Marvin) and his gang. Local authority a joke, the tenderfoot lawyer and his new, more rough-hewn friends have to deal with the truly vile varmints. Again, simple on the surface.

“Is everybody in this country kill-crazy!?”

The Facts:  Critics of the day, in their era-long blind spot condescension to the genre, yawned. Audiences put it at 20th place for the year, though many felt the small-scale, 122-minute black & white picture was oddly out of the style-march in a day dominated by the spectacular vistas of Lawrence Of Arabia, Mutiny On The Bounty and The Longest Day.*

Buying Dorothy Johnson’s 1949 short story for $7,500, director John Ford had James Warner Bellah and Willis Goldbeck work it over to suit him, and wrote Wayne “For a change no locations… All to be shot on the lot…Seriously, we have a great script in my humble opinion.” Stewart and Ford had just finished Two Rode Together (using Wayne’s Texas locations and sets from The Alamo, which Ford had paternally horned in on, to Wayne’s anxiety and expense). Miles, 32, had been part of The Searchers, and old associates Andy Devine, John Qualen and John Carradine were enlisted.  Ford gave recent pal Woody Strode (Sergeant Rutledge) another supporting role. On board for their first experience with the director were Marvin and Edmond O’Brien. Marvin and “his Myrmidons” Lee Van Cleef and Strother Martin had all appeared together on The Twilight Zone in ’61, a western episode called “The Grave“. 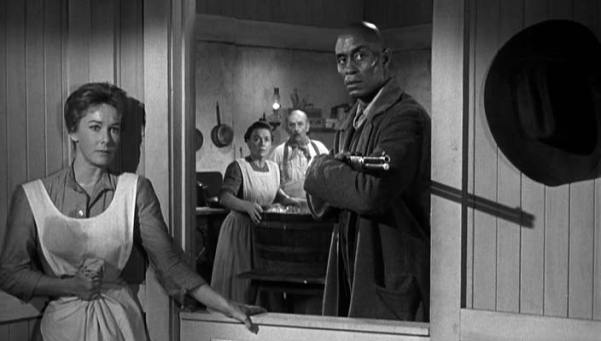 The bulk of the picture was done on studio sets with the few exteriors at the Janss Conejo Ranch in Thousand Oaks, California. Typical dramatic landscape or relaxing scenic embroidery and the usual expected time-filler action this time take a back seat to mood, allegory and a deliberately stylized return-to-form approach which included using black & white cinematography rather than color. Cameraman William H. Clothier wanted the latter, but Ford insisted the all-important showdown scene needed to use the kind of shadow & light depth and contrast b&w accented.

Marvin, at 37, was recommended by Wayne on the strength of his scene-stealing turn as a colorful bad guy in The Comancheros—Lee’s ‘Tully Crow’ in that exuberant saga was a Cub Scout compared to the irredeemable sadist he unleashed as Valance. Ford liked the wily and wild ex-Marine and the hard-drinking Marvin rolled off the older man’s time-honored irascibility.  An invigorated O’Brien recalled the work with “In all the years, I have never enjoyed an acting experience so much.”

Shooting ‘Liberty’ wasn’t as merry for others. Stewart had escaped Ford’s sting on their previous match-up, but joined the club this time, dressed down in front of the crew for meekly questioning a makeup job.  Ken Murray, a familiar radio and TV personality known for taking home movies of Hollywood folk said “Ford was a monster on the set, an ogre.”  Strother Martin was terrified, so keyed up he’d literally jump when summoned. Mostly, ‘Pappy’s abuse went to his usual taunting of Wayne, but this time he pitched it to the point of insulting his most successful protégé vs. Strode, over Woody’s athletic record and war service as opposed to Duke’s.  Strode related that this “really pissed Wayne off, but he would never take it out on Ford. He ended up taking it out on me…What a miserable film to make.”  The two big men nearly had a fistfight—which would have been bad news for the movie’s budget, Wayne’s dignity and Strode’s career.  Professionals, they worked it out.

The collective effort received one paltry Oscar nomination, for Edith Head’s costuming. Marvin and O’Brien both deserved to be on the roster for Supporting Actor. The hit Gene Pitney song made it to #4 on the charts (a fun tune, but thankfully not used in the film).

The Legend:   Another western myth-maker, Sergio Leone, called this his favorite Ford movie because “it was the only film where (Ford) learned about something called pessimism.” Which shows you can be a worldly, well-regarded cinema artist and still say idiotic things. He evidently missed any number of Ford’s earlier works as far back as the early 30s. Pessimism is here, sure, regarding the debasing carny aspects of politics (the huckstering windbag ‘Maj.Cassius Starbuckle’, boomed to the rafters by John Carradine at his theatrical best),

but more to the point is deep lament, loss of hope, the price of heroism, the scars of regret and resignation as the promise of belief, youth and an untamed country cede to compromise, age and ‘civilization’. Ford has the actors play it Big, but with this marvelous cast they’re all good enough to know how to keep flamboyance from crossing (“the picket wire“) into parody. The downsized physical scale renders the outsized oratory and posturing somehow more touching and gallant, frail and frightening.

The strain between opposing sides of the American character is represented by essential archetypes: one, Stoddard, pleading principle and civic progress in a place prone to random terror; another the rugged individualist Doniphon, unafraid of decisive action; both are poised in stark relief against the darkest side of the cultural gene pool, Valance and his vermin. Fittingly, the swing vote for most of the decision-making is the woman in the middle, Miles’ spirited Hallie is the wisest of the group—but for one crucial choice. 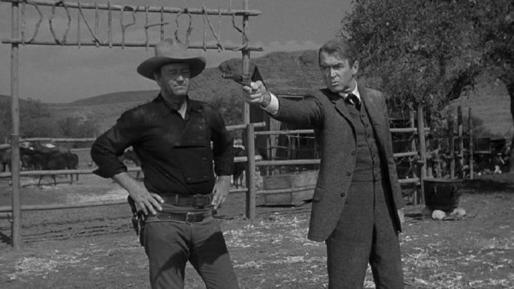 Beyond the pure cinema fun in the emblematic swagger of Wayne, the part-hesitant, part defiant decency of Stewart, Miles charm and Marvin’s intimidation, O’Brien’s let-‘er-rip bluster and Andy Devine’s comic cowardice (‘Link Appleyard’, sheriff), the screenplay packs a royal flush of Americana. Within the good guy/bad guy framework it looks at the polyglot fabric of a community rushing into a new way of life, giving examples through the mix of striving citizens and wastrels, hard-working immigrants (Qualen & Nolan’s Swedish hash house cooks), local amigos (O’Brien’s ‘Dutton Peabody’ favors the Mexican cantina and Appleyard is married to a Latina), racial pride and prejudice (Strode’s ‘Pompey’ is Doniphon’s lifelong friend yet the saloon doesn’t want him to enter), self-determination, the press, schooling and civics, a career built on false pretenses, the dilemma of self-defense when there is no other choice and the reality of confronting violence, the use and misuse of national mythology; in short, it’s about people, strong and weak, and ideals, outdated and ongoing. Inclusion on one end can signal exclusion on another. Just a simple, old-fashioned black & white cowboy movie… 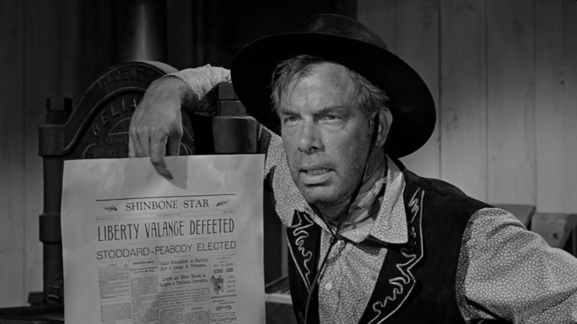 The Truth:  “I’ll get it, Liberty!” (SMACK!)  Watching The Duke gracefully execute The Movies Greatest Nonchalant Snap Kick to a sniveling weasle is the gift that “replay” always keeps giving.  True, Wayne, 54, and Stewart, 53, were playing men half their age. So what?  Duh, it’s at least partially an “Old Man’s Movie”. Well, who the hell asked you, hashslinger?  The world may be run by nasty old men (some of them too much like Liberty Valance), but there are a few more of us (and mature ladies), not in the plunder business of ruining the future, who understand the cost of questionable decisions and lost chances. I first saw this on TV (CBS Thursday Night At The Movies) as a teenager. Liked it, but wasn’t sufficiently blooded by time and defeat to get more than the obvious. I recall thinking it odd that it was not in color and looked more like a spruced-up television two-parter. I can’t say how often I’ve seen it since (plenty), but I appreciate it more each time. It’s a shudder thinking now I’m not far from Ford’s age when he made it (he was 67), but by then he’d seen, done, created or been part of more life, strife and art than any dozen lazy armchair cowboys, let alone self-appointed, keyboard-taming experts on how best to say what to who about when. Those who don’t “get” the genre (Get with the genre, Pilgrim), who presume sophistication beyond the ken of these extinct Hollywood dinosaurs or are just too frenzied checking their fascinating social media to relax with a story, one that might ask them to think, will just have to miss out on Strother’s insane giggling, Lee’s dazzling death lurch into the street and watching Woody Strode carry John Wayne on his back. Let alone seeing and feeling that cactus rose on Tom’s coffin…. 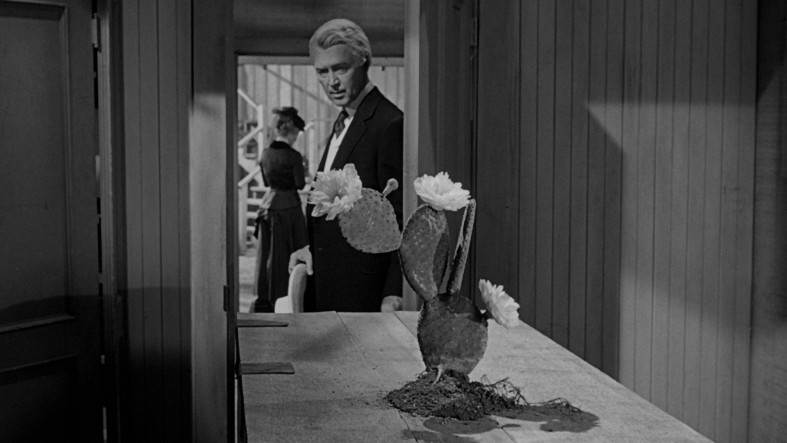 * Can’t see the desert for the cactus. Critics initially sniffed on or snarled at The Searchers, The Big Country, Rio Bravo, The Magnificent Seven, The Alamo, How The West Was Won, The Good, The Bad And The Ugly and The Wild Bunch. It’s what you whipper-snappers might call “Fake Views”.  1962 also saw another classic western elbowed aside, this one from the crusty Ford’s equally cantankerous inheritor, Sam Peckinpah: the superb Ride The High Country was dumped (like “gutter trash“) onto the bottom half of double bills, and crawled gutshot to 91th place. Studio morons cheated audiences of that diamond, but with ‘Valance‘ it was more that folks preferred a happy Duke in Hatari! and laughing with Jimmy Stewart’s Mr. Hobbs Takes A Vacation.  History, posterity and judgement snuck up on everyone.

** Cast notes: It was the third of four featured appearances in Ford films for Woody Strode (he also had a blink & miss unbilled close-up in Stagecoach).  Willis Bouchey (“Nothing’s too good for the man who shot Liberty Valance“) had parts in 9 of the director’s pictures. John Qualen also logged 9. John Carradine survived Ford’s needling on 11. Carleton Young, whose precise baritone voice delivers the movie’s famous “print the legend” figured in 5 Ford films among his 258 credits between 1935 and 1973. For 49 of those years until his death in 1994 he was married to a famed exotic dancer, Noel Toy, the nation’s first Chinese-American fan dancer, whose peekaboo capering made the scene at legendary nightclubs like Forbidden City and the Latin Quarter. You won’t read that in The Shinbone Star…. 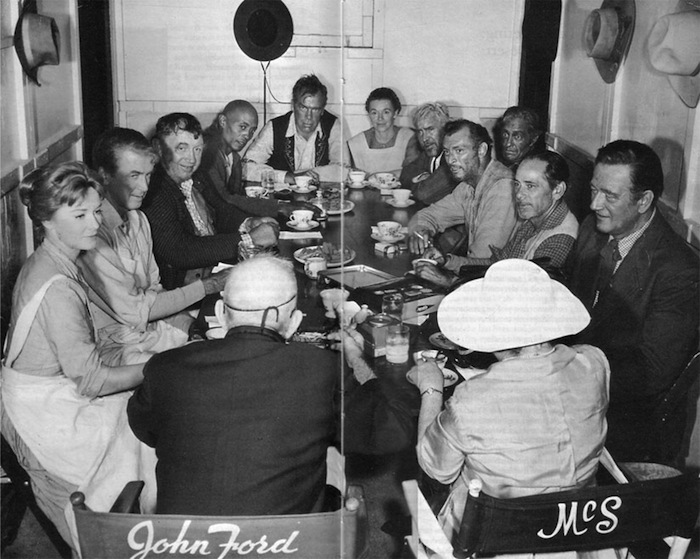 One thought on “The Man Who Shot Liberty Valance”