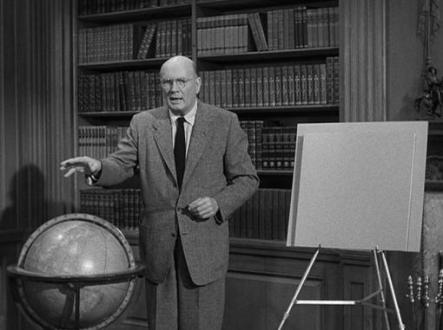 THE MOLE PEOPLE  has much the same effect as a visit to the Louvre or Smithsonian: it’s hard for mere words to convey that which you have witnessed.  A hush of awe is appropriate when considering this 1956 feat, combining the arts with history, archeology and geography. Yes, and love, the kind that spans centuries in a few minutes and two or three lines of dialog, yet can be cruelly snuffed out by a collapsing pillar when it’s time for the scripts ideas and the producers budget to flap.

Perhaps director Virgil Vogle felt the 17 days of shooting and $200,000 expended were epic enough to put over the sweeping adventure saga, led off by proudly announcing “ASIA” as a that’ll-hold-’em location for the tale, one which will plumb the very depths of the Himalaya to reveal what became of Ancient Sumeria.

Before the movie proper starts, there is a very entertaining 5-minute prologue from Dr. Frank Baxter, who was omnipresent in the decade, lecturing on science and travel for TV specials. His infectious enthusiasm and flamboyant arm movements are alone reason to watch this one.

“The thing that impresses me the most is the complete and utter silence. You can almost hear it.”

Determined (not to say remotely convincing) John Agar leads glum Hugh Beaumont and nerve-tattered Nestor Paiva into the underworld lair of the survivors of The Flood.  The fey, syllable-gnawing, albino King, his sneering high priests and a phalanx of not-too-effective guards, plus a few disconsolate slave girls, have somehow lasted for thousands of years beneath the surface without more to eat than mushrooms and goats (don’t ask), mercilessly lording it over another race who exist just to be pushed around.  These pitiful mole people creatures, with big claws, humped backs (newspapers stuffed under the costumes) and goggle-eyed mugs may be the key to our heroes getting out of this jam. Transgressions are punished, and outsiders (fairly rare) are dispatched, as are the aging slave dames, so it’s a harsh setup unless you’re the royalty or priest (and how is this different from real life?).

Universal’s Music Department overseen by Joseph Gershenson provides a decently ominous music score *, and it’s easy to see how little kids, especially decades back in more innocent days, could think the scaly mole dudes disappearing into their holes were kinda creepy (ancient memory serves: “Keen! Let’s go play this in the back yard. Let me get my guns and Dad’s flashlight!”).

Aside from a charmingly silly idea, and the danger music, it’s pretty terrible from one end to the other, yet a lot of fun to watch for the inept art direction, jumbled continuity, mumbo-jumbo logic, clumsy action scenes—all scenes, acting, etc. A thoughtful feature is the 50s Obligatory Exotic Dance befitting ancient civilizations, but this one takes the dubious prize for the clunkiest ever done.**

Written by László Görög, who we mention here just because he has a cool name,  unfolding over 77 minutes, the suspiciously standard running time for a number of these cheapos, with Cynthia Patrick, Rodd Redwing and Robin Hughes.  Beaumont, for whom this probably was a career nadir, had been plugging away since 1940, but was rescued the following year by the first of 234 episodes of Leave It To Beaver, delivering calm wisdom and wry wisecracks, earning a place in millions of hearts and memories—how would you like to be remembered for The Mole People?   Agar continued his run to glory with The Brain From Planet Arous.  Director Vogel had four decades of mostly TV credits to look forward to, but he did manage to secure chunks of cheese with films like The Land Unknown and Invasion Of The Animal People, no doubt on the strength of–and measured against– his triumph here. There are some scribblings on the Internet that ascribe the jarring climax (we should all have such ascription) to sensitivity over ‘interracial romance’. With an ancient Sumerian albino lady?–isn’t that carrying defilement fever a tunnel too far? 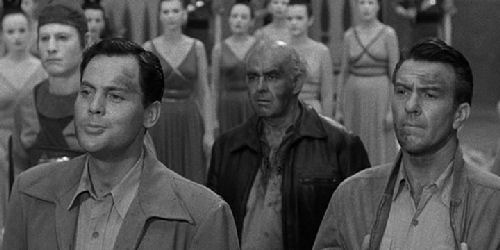 *Gershenson wasn’t a composer but he amassed 328 credits in his tenure as Musical Director for Universal Studios from 1940 to 1969. The music cues for this picture (one of 25 he managed in 1956), and others of its stripe, were put together by an unsung team of associates.