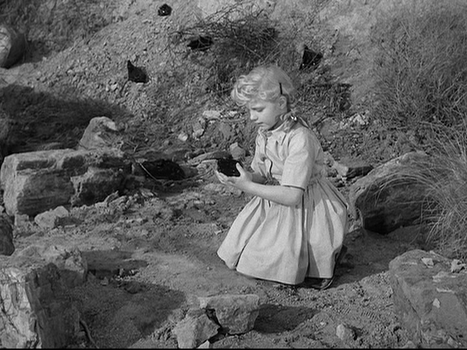 One field trip she will never forget

THE MONOLITH MONSTERS should get some kind of award for stretching the threat-concept threshold to regions no one else thought to mine (ever).  After a “From time immemorial” intro lulling us that most meteors are harmless pretty things to make a wish on, this 1957 rockhound has one crash near ‘San Angelo, California’ (convenient movie desert burg, the desert being movie-convenient for experimentation, radiation, mutation, basically anything with an “ation” on the back end of it). The fragments, when touched by water (science!) grow exponentially, until such height that they just topple over, crushing all in their path. They also have the ability to turn those desert folk (starting with the dispensable San Angelenos of the supporting cast ) into petrified people, “welded into a solid mass” (don’t forget to affix the National Monument sticker to your windshield).

“I made a breakdown of the rock we found here in the lab. With the exception of a trace of iron-phosphate – not enough to mention – they’re all silicates. Chert, feldspar, pyroxene, almost all the olivine group, flint – almost solid silica, little bits of it slapped together in such a way that it shouldn’t even exist.”

Great, I suppose they’re moving in next door

Outrun…the rocks?  Directed by John Sherwood, who got stone-cold performances from his actors, likely hardening as they mull careers crystallizing into something that falls down if people see them in a tumbler like this. Originally an opera singer, 26-year old Grant Williams had just done a neat job in the classic The Incredible Shrinking Man.  He looks and acts diminished by the thought-porous material here, while Lola Albright seems downright embarrassed (her acting here not her finest hour). No wonder, as Universal thought so highly of this that they released it on a double-bill with Love Slaves Of The Amazon (which sounds much more promising).

In support, reliable pros Trevor Bardette and Les Tremayne soldier through it all. Thank God it’s such a cinch to blow up the nearby dam: tell the governor later, after you explain about the growing space-rocks that almost turned “little Ginny Simpson” into an exhibit.

77 minutes, with pebble parts for Troy Donahue, William Schallert and Paul Peterson.  John Sherwood had a noteworthy collection of samples as an assistant director going back two decades (Ball Of Fire, The Pride Of The Yankees, Bend Of The River, The Mississippi Gambler, The Glenn Miller Story) but this one’s no agate to flash. Still, it brought in $2,000,000.   “Look at the dog – it’s as hard as a piece of granite!”