THE LONG SHIPS—-Oscar Homolka, swathed in animal skins and furs, his beard covering the compass, bellows drunkenly “My mouth feels as though a she-cat had littered in it!” Such pearls abound in this Real Boys adventure epic from 1964, the kind of road trip where you toss some battle-axes into a dragons-head boat, row like hell from Norway to North Africa, and swipe a house-sized Golden Bell from the Moors. Torture must be undergone, and you are required to bonk & cleave a couple hundred  enemies, but then that’s all part of being a Norseman. 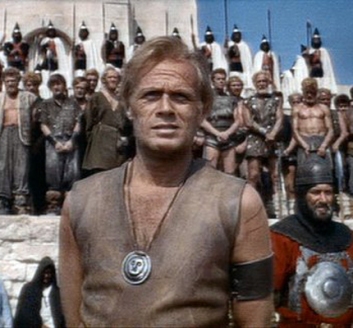 Director Jack Cardiff was allowed to warm up for this matinee fest back in 1958, when he was cinematographer on The Vikings. Given full rein here, he made good use of locations in Yugoslavia and a fairly lavish $4,000,000 budget from producer Irving Allen.

The scripts situations and resolutions are amiably dumb, strictly from Dell, but then you don’t tune in to one of these sagas expecting George Bernard Shaw.  Richard Widmark wisely plays along tongue-in-cheek with the goofiness: he wasn’t nuts about the project and only signed if longtime pal Sidney Poitier would play opposite, which he does, amusingly so, as Widmark’s merciless Moorish adversary. 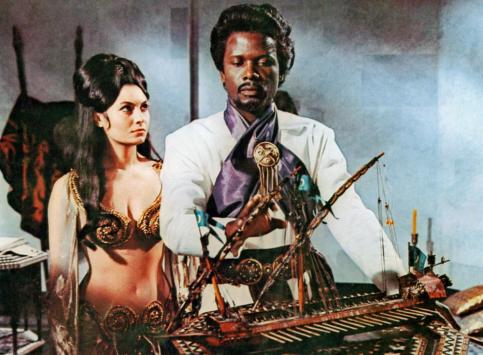 Russ Tamblyn, meanwhile, is terrible (sorry, Riff), playing it straight, and the casts two female reps, Rossana Schiaffino and Beba Loncar, are along only for the sake of decoration. Homolka is great, realizing gusto rather than dignity was what was required. Composer Dusan Radic provided a fittingly manly score.

Two best sequences: a furious seashore melee where the Norsemen showcase their ferocity against a horde of turbaned Moorish cavalry (watch those horsefalls, guys–yikes!, the stunt crew earn their pay in this bonkout), and then later, when the Moors repay their guests party-crashing by demonstrating a marvelously mean medieval persuasion device called the ‘Mare of Steel’.

125 minutes, with Edward Judd, Colin Blakeley, Gordon Jackson and Lionel Jeffries. The producers got a lot of grief from the press for filming over in then-Communist Yugoslavia, and Poitier remarked that Belgrade was the worst location he ever worked in. His buddy Widmark dismissed the enterprise with “it wasn’t a happy time.” It came in at berth #43 for the year, earning $4,000,000 in the States. For men who were boys long ago…. 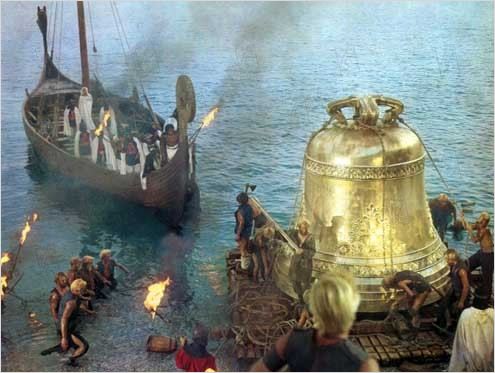