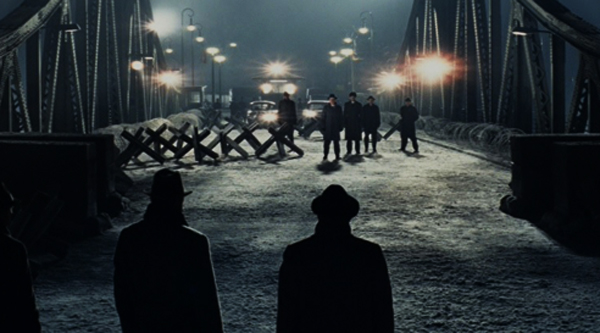 Based on the daunting twin legal cases handled by redoubtable lawyer James B. Donovan between 1957 and 1960, it begins with Donovan’s beyond-unpopular representation of Soviet spy Rudolph Abel (beautifully underplayed by Mark Rylance), in turn leading to even higher stakes when tasked to bargain Abel for downed American spy, Air Force pilot Francis Gary Powers, taken prisoner by the Russians in an incident that tweaked already bow-taut tensions between the United States and the Soviet Union. If that wasn’t migraine enough, then ultra-repressive Soviet satellite East Germany entered the mix.

Those old enough to recall the sudden, brutish building of the Berlin Wall, the insanely naive ‘duck & cover’ drills given children in case of atomic attack, the omnipresent fear & paranoia mindset gripping the planets most powerful adversaries will be in for what’s nearly macabre nostalgia. Over a well-measured 141 minutes, Spielberg’s  fluid direction and a fine script from Matt Charman and The Coen Brothers pace off the gripping story, greatly assisted by cameraman Janusz Kaminski (his 15th collaboration with the director), and the production design, art direction and special effects (the downing of Powers’ U-2 is a pulse-raiser).

Rylance took home an Oscar for Best Supporting Actor, and there were nominations for Best Picture, Screenplay, Score (another good one from Thomas Newman), Production Design and Sound Mixing. 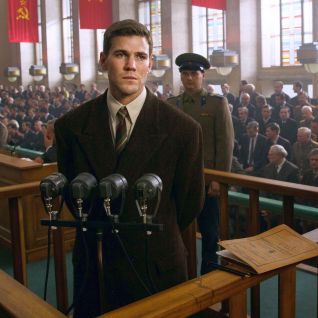 Depressing old East Germany is recreated to chilling effect. I still have my I.D. bracelet, issued through my grade school, to put on our little wrists. Name, address and a letter denominating religion (I had ‘P’ for Protestant, which was close enough). The idea behind the bracelet, beyond the rather innocent cover of being handy in case you got lost, was that a thermonuclear flash would burn the trinket and information into whatever was left of your skin, to make burial (by whom?) arrangements easier after a presumed ‘cease-fire’. Nice to feel wanted.