Upon its release in 1964, it was jumped by reviewers as being sub-par for Hitch, but its reputation has been elevated in the light that even grade-B Alfred beats grade-A offerings from most pups who seek to emulate him. 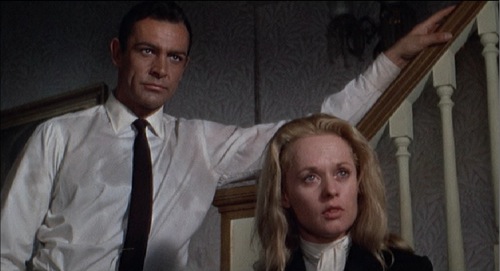 Critics at the time raked her over the coals, but they were all wet: Tippi Hedren does an exemplary job of shading iciness and compulsion with hurt and panic. Hired after Hitchcock saw footage from Dr. No, Sean Connery as usual commands almost every scene he’s in with the magnetic assurance that was his trademark. Diane Baker, by this time already relegated to “the other girl” status, has some good moments (plus she never looked better), and Louise Latham plays Marnie’s damaged mother to effect: her film debut, she was just eight years older than ‘daughter’ Hedren.

Giving the 130 unhurried minutes a lushly haunting underpinning is another great soundtrack from Bernard Herrmann, in his last collaboration with the mood-precise director, whose tension-torqueing visions he’d complemented and enhanced in a slew of classics.

Two hours and ten minutes does push the unlikely scenario a good ten too far, and some of the process photography and several of the set backdrops are jarringly phony (thank Universal’s legendary cheapness with a buck and Hitchcock making some impressionistic choices that weren’t in step with the time. Several of the horse-riding shots badly backfire. But generally Robert Burks’ camera skill and use of color is striking; the story and actors interesting enough you won’t much begrudge the occasional sloppiness. Jay Presson Allen wrote her script after starts from Joseph Stefano and Evan Hunter, based on the novel by Winston Graham.

This maligned suspenser marked the end of Hitchcock’s grand run (the following Torn Curtain and Topaz were letdowns), and along with being composer Herrmann’s seventh and final work for the director, it was the last of twelve from cameraman Burks, and the final assignment for Hitchcock’s favorite editor, George Tomasini (who died later that same year). 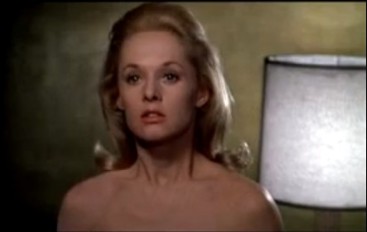 With assist from Martin Gabel, Alan Napier, Milton Selzer, Mariette Hartley, and Bruce Dern. Quick eyes will spot Rupert Crosse, as a janitor, years before his score in The Reivers. At a cost of $3,000,000, it brought in $7,860,000 in America, landing on spot #30 for the year.