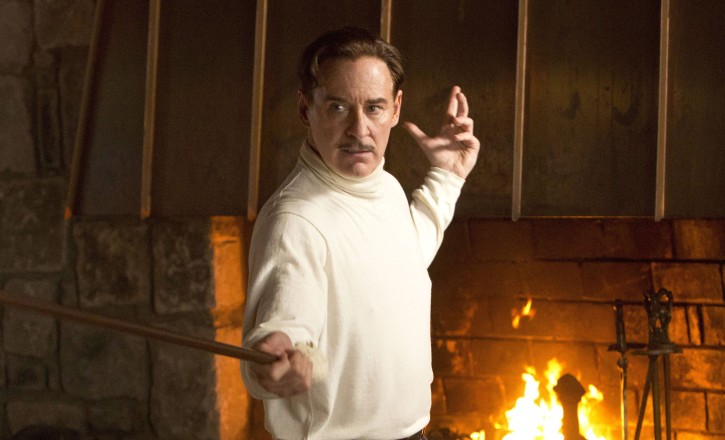 THE LAST OF ROBIN HOOD—-got generally clobbered by reviewers (Dakota Fanning being panned left & right) and made a strangled $288,000. It’s an 88 minute attempt to cover the last few years of Errol Flynn’s life, when the disintegrating lothario decided to go out with a teenager on his arm (one arm, the other holding either vodka or a needle), in the form of Beverly Aadland.  Her grasping stage-mother tagged along, and profited from the seamy (yet seemingly sincere) ‘association’ (code for, uh, ‘fucking’) between the 48 to 50-year-old actor and her 15 to 17-year-old nymphet daughter. 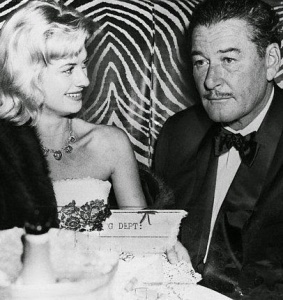 Say ‘nymphet’ and it conjures some oven-fresh dish that We All Have Seen, Known, Lusted Over, Thought About or Almost Did Something With —and here is one of the instances that the movie teases but doesn’t deliver (let’s see now, um..what’s the slang word for that?) in that Ms. Fanning, cute as she is, doesn’t offer much here in the way of seductiveness.  Were the writing & directing team of Richard Glatzer and Wash West stymied by the idea that the ‘girl’ in question needed to be hot enough to seduce a guy who’d been to bed with half the women in North America and 20% on the other continents?  Or is it that Dakota, a remarkable child actress, just hadn’t hit her stride, now that she was a ripe old 20?

It’s a low-budget production that does what it can to give some decor and prop effects to resemble 1957-59, but it comes off skimpy: the ‘party’ scenes and ‘location shots’ are like a Mad Men-raised generation’s imagining of an era they’ll never really be able to fathom.

Two good things save the movie: Kevin Kline as Flynn and Susan Sarandon as the mother.  Kline was 66 (this was released in 2013), insinuating the sad, ‘carefree’ Flynn, and while he occasionally falters with the voice (a hard one to capture what with Flynn’s Tasmanian tones softened by a quarter century in California), his look, poise and movement do a good job of suggesting the scamp-on-skids that Flynn was when he veered into Aadlandland.  Errol did that during the making of Too Much,Too Soon , where he scored well playing his old carousing pal, the legendary John Barrymore; life imitating art to an uncomfortable degree.  The script, though, lets Kline down; as they get at Flynn’s batteries running low, the poignancy comes across, but they don’t sell his magnetism or fun, much like they soft-peddle Aadland’s naughtiness-nudge for the actor.  Pull your punches or throw them, already. 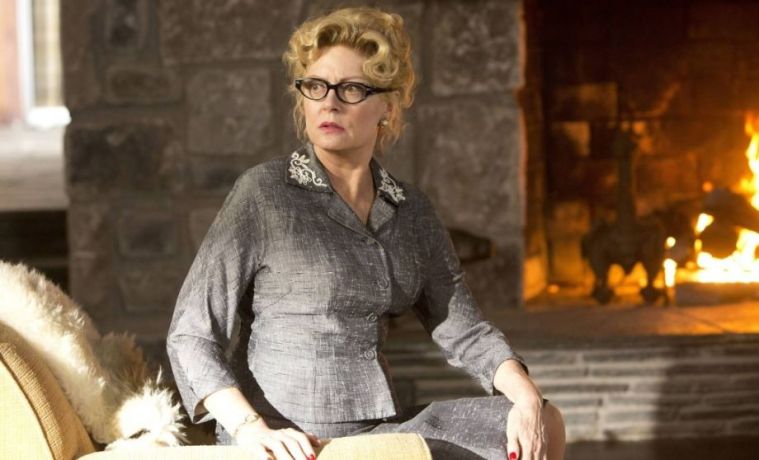 Not handicapped like Kline by character-recognition, or like Fanning with awkward innocence/sex-appeal, Sarandon is even better, and makes all she can out of the familiar stage-mama gig, including a convincing gait (Mom Aadland had an artificial leg) and horn-rimmed glasses that a masquerade-partier would kill for.  Past those specs, her eyes say much more about desperation than the dialogue can manage.  A nice bit comes from Patrick St. Esprit as the fed-up father.  Other roles are all pretty weak—and why did they think they could get away with Joe Knesevich as John Ireland?—spare the dead.  Excellent music score from Nick Urata is the best technical credit.

The real story is one of those where the only people who knew the truth are all gone, and battle lines on ownership of the morality involved make for convenient wave-away’s or finger-pointing depending on what side of whose bed the viewer got up on.  Without sin?: cast away…wherever he is, Errol Flynn is no doubt having Helluva good time.

One thought on “The Last Of Robin Hood”