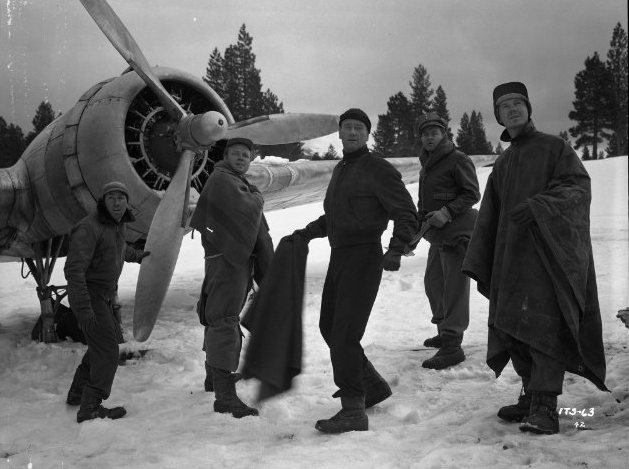 Island In the Sky did well when it came out in 1953, earning a respectable $8,300,000 on a $962,000 investment.  Then it was out of circulation for fifty years, its recovery from Frozen Movie Isolationland a real treat for fans of adventure stories (it’s a dandy), airplanes (great flying stuff) and John Wayne (one his best performances).

Wayne fans can point to this and say “see, I told ya”, freeing Dukeaphobes to leave the room in a huff and look for a copy of Blood Alley so they can ruin another beer-fueled matinee.  He’s authoritative but relaxed (ala In Harms Way ), and much more fallible than his typical screen persona allowed.

Taut direction (and quietly effective narration) by flying enthusiast William A. Wellman, written by the ‘Air Master’,Ernest K.Gann, partially based on a real-life search he took part in.  A transport plane goes down in the subzero wastes of Labrador. Five man crew.  A desperate rescue operation ensues.

Only one or two brief, acceptably corny moments leave nary a blemish on a taut 109 minute show, with naturalistic acting from a seasoned cast of reliables, no grandstanding whatsoever from the star, non-blather dialog among the ‘professionals’ that holds the interest, and fine location work.

William Clothier did the outstanding aerial photography, Archie Stout the ground shots and interiors.  Filmed in bone-cold February snows near Donner Lake in the Sierras.

One Duke directive to digest: “I’ll shoot the first one of ya to leave camp. I’ll aim for your legs. I may miss and hit ya in the back of the head. Either way serves ya right.”