GORILLA AT LARGE is about as ridiculous as they come, a 3-D shot, carnival-set murder melodrama where one of the suspects is a big ape. It’s also very entertaining, played with  varying degrees of exuberance, resignation and embarrassment by an able cast who were at least glad to get paid if not thrilled about having this goofball on their credits roster.

When a snide carny has his neck snapped (and is thoughtfully impaled on a spiked fence) the local cops (led by scowling Lee J. Cobb and a jutting cigar) try to sort the suspects. The powerlift involved in the murder points in the hairy direction of showpiece act ‘Goliath’, a huge gorilla. But, wait a banana, maybe it’s the defensive boss ‘Cy Miller’ (Raymond Burr), jealous of the attention given his foxy trapeze babe wife ‘Laverne’ (Anne Bancroft)? Is it eager-to-please barker/law student ‘Joey’ (Cameron Mitchell) or ‘Kovacs’ (Peter Whitney), Goliath’s hulking handler? Lee Marvin, slipping down a notch from his previous showier roles, plays a dimwitted patrolman. He barely contains his smirk over the material, and “serious” actor Cobb (the same year he drew praise for On The Waterfront) must have laid on the Rolaids over this dippy project. Mitchell, outfitted with a blond dye job, seems to relish playing a good guy for a change. Unsung character actor Whitney does quite well. Poor Anne Bancroft often cited this as her worst movie ever, and the 22-year-old is deliciously bad as the tease who has the team in a tizzy. Whether she’s camping it up by design or is just not very good is up for grabs, but she looks to kill sporting hotcha outfits and come-hither poses. 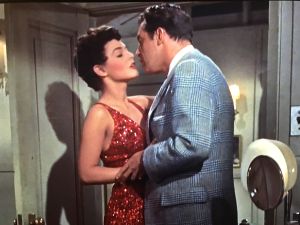 Get your stinking paws off me you damned dirty lawyer!

The best performing is put across by George Barrows, done up in an outrageous gorilla suit as the title threat. The year before, Barrows strode across screens in another furry outfit, bringing immortality to Robot Monster. That bad-classic is more infamous, but you really shouldn’t ignore Goliath in his glory.

I wonder if a couple of men came up with this plot?

Directed by Harmon Jones, the script is filled with howler moments, and there are at least a half-dozen shots of Goliath hulking his fierce mug straight into the collective puss of 3-D viewers. There’s no shortage of gam shots of Bancroft, arrayed to please simian relatives in the crowd. Lionel Newman cranks up the danger mode with a blaring “here he comes!” score. 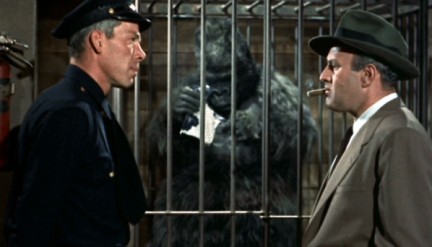 Jones had an impressive track record as an editor (Anna and the King of Siam, Gentlemen’s Agreement, Yellow Sky, Panic In The Streets) but his output as a director of 15 features was mediocre. Though not a roaring success at 138th place in ’54, Harmon’s manhandling of the massive monkey showed a profit, grossing $1,500,000 against the $400,000 it took to stage the rampage.