SO PROUDLY WE HAIL! entered the fray as a 1943 salute to the Army nurses stationed in The Philippines when Japan kicked off their plunge into WW2. Joining the year’s regiment of war pictures, this Paramount effort beat MGM’s same-subject Cry ‘Havoc’ into theaters by a few months. From our observation post the latter film holds up better, but with bigger stars and a jump on timing this one did much better at the boxoffice, coming in 15th (11 of the top 20 were war-related) and grabbing a quartet of Oscar nominations. Corny and dated, but worthwhile as a period piece, star-gazer and unabashed battle cry.

Told in flashback, a group of exhausted nurses, evacuated to Australia, relate their experiences surviving the ordeals on Bataan and Corregidor. Claudette Colbert is the compassionate leader of a crew featuring Paulette Goddard, as the quip-equipped flirt expert, and Veronica Lake, the hard case who has to channel hatred of the enemy and put her angry ardor into morale mode. Claudette falls for handsome wounded officer George Reeves; Goddard gets tangled up with a golly-gee Marine nicknamed ‘Kansas’, played by debuting Sonny Tufts. 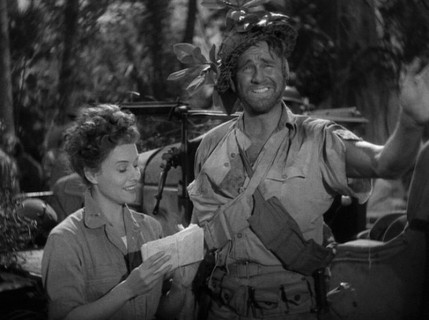 The cast is capable, but Allan Scott’s script is loaded with speeches, either ‘inspirational’ or syrup-soaked (at some point everyone makes a statement or three), silly comic touches with doofy-acting Tufts, and then-contemporary agitprop tossed in to conceal how much of a disaster the doomed defense of the Philippines really was: don’t want to make MacArthur look bad.

The wheeze-bag screenplay got an Academy Award nomination (yeesh!), but so did lively Goddard (Supporting Actress), the Cinematography and Visual Effects, those three categories deserving nods. Grosses reached $8,600,000. Our fury intensified. Angered by a sucker punch, one of history’s mightiest backhands was poised to be delivered. If Tojo had a clue, he would have realized sinking battleships was one thing: pissing off Hollywood’s leading ladies was really asking for it. 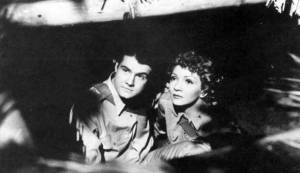 * Though having Goddard run around the studio jungle in a black nightgown (she lost her uniform, see) lowered realism as much as it raised men’s heart rates, the movie kept Lake’s famous hair tied up until her sacrificial gesture when she let it down (and poked a grenade in her bra) to entice “the Nips”. Lake’s signature long locks were so popular that there were instances of female defense workers getting their copycat coifs snared in machinery, making riveting less than Rosie. Rest assured, we’re not making mock: my Mom worked in Kaiser’s shipyards, wielding a blowtorch making Liberty Ships in Portland: she saw some horrific on-the-job accidents. My Dad, meanwhile, was risking torpedo’s and typhoons on unarmed transports  in both the Atlantic and Pacific. We did our part. Where is FDR now, when we need him more than ever?