HEMINGWAY’S ADVENTURES OF A YOUNG MAN was in the process of being filmed when Ernest Hemingway committed suicide, so we’ll never know what ‘Papa’ may have thought of the movie when it came out in the autumn of 1962. His friend A. E. Hotchner, with the author’s OK, had written the screenplay from ten of Hemingway’s semi-autobiographical ‘Nick Adam’s short stories, which with one exception hadn’t been previously adapted, and revisited part of “A Farewell To Arms”, filmed twice before. Martin Ritt directed the lengthy, episodic, star-studded coming-of-age drama, location shooting in Wisconsin and Italy. *

Stifled by the prospect of staying tucked away from life in his rural Michigan, young ‘Nick Adams’ (Richard Beymer) hits the road in search of Experience and Meaning. Wrenching away from family and friends, he has a colorful but rocky journey, fraught with danger, laced with challenging characters, culminating with service as an ambulance driver on the Italian front in World War One.

Drubbed by critics, the handsomely packaged, reasonably interesting collage of familiar Hemingway themes was also a box office failure, grossing only $2,700,000 against a cost of $4,700,000, listing into 87th place for the year. Better than its reputation, it’s a mixed bag. On one hand, there are some effective performances and Lee Garmes camerawork, especially in the early sections, is lovely. Perhaps audiences didn’t respond because they’d had enough Ernest to last a while after The Sun Also Rises and the recent version of A Farewell to Arms, and like those, this was a rather gloomy picture with a pat, unsatisfying payoff. Beymer caught much of the flack, unfairly, as he’s pretty good, but after failing to click in Bachelor Flat, Five Finger Exercise and The Stripper, it seemed like the glory from West Side Story left him with no where to go (in The Longest Day he was just part of the all-star cast): he soon dropped out of feature films and went in other creative directions.

Though Nick/Beymer carry the film, they’re backed by more vivid characters and stronger actors. Some have only one or two scenes: Dan Dailey as an alcoholic publicist, Fred Clark as a burlesque producer, James Dunn a telegrapher, Diane Baker the girl left behind, Corinne Calvet as a recruiter for the ambulance corps. Larger roles are well done by Arthur Kennedy, as Nick’s browbeaten father (emulating Hemingway’s), and Jessica Tandy, as the severe, bible-thumping mother (the bane of the author’s life). Susan Strasberg is the main romantic interest, but she and Beymer don’t really connect. Her segment as a nurse in the Italy-WW1 stuff reprising “Farewell” is the longest, greatly helped by engaging turns from Eli Wallach and Ricardo Montalban as Italian soldiers who befriend the adventure-seeking American. The most telling passage comes early in the journey when Nick encounters hobo pals ‘The Battler’, a brain-addled ex-boxer, and his minder ‘Bugs’, played by Paul Newman and Juano Hernandez. Aided by a face-mashing makeup job and a one-punch-too-many vocal interpretation, Newman gets the showiest role in the story, and Hernandez offers a quietly sturdy counterweight. 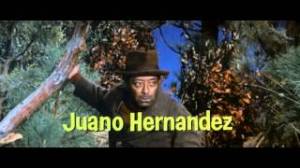 * Years earlier, “The Battler” had been done twice on TV, first with Chester Morris and Dick York, later with Newman and Dewey Martin. Published in 1929, “A Farewell To Arms” was on the big screen in 1932, with Gary Cooper and Helen Hayes, then in 1957, with Rock Hudson and Jennifer Jones. One more attempt came in 1996 with In Love And War, starring Chris O’Donnell and Sandra Bullock.