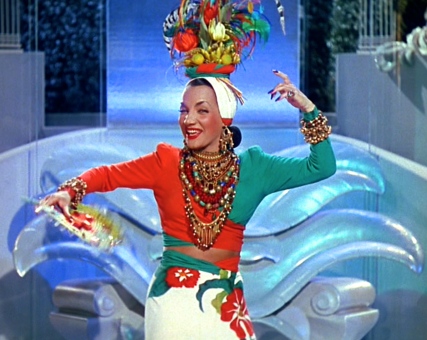 WEEK-END IN HAVANA followed the dancing footsteps of Down Argentine Way and That Night In Rio by invading another Latin American country with songs, comedy and romance courtesy of 20th Century Fox and Technicolor. 2nd-unit shots of bygone Cuba add to the nostalgia, done up with zest by Alice Faye, John Payne, Cesar Romero and the mold-breaking Carmen Miranda. 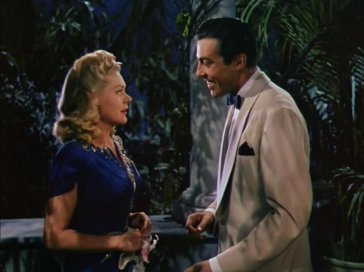 ‘Jay Williams’ (Payne), VP of a cruise ship line, has to interrupt his impending wedding and see that passenger ‘Nan Spencer’ (Faye) gets her money’s worth of a good time in Havana and signs a waiver saying she won’t blame the line for the ship’s captain’s actions that messed up her cherished vacation plans. Of course, Jay and Nan will eventually see eye-to-“Ay Ay Ay” but first complicated hoops must be rumba’d through, charted along by seven musical numbers spun from Harry Warren & Mack Gordon. 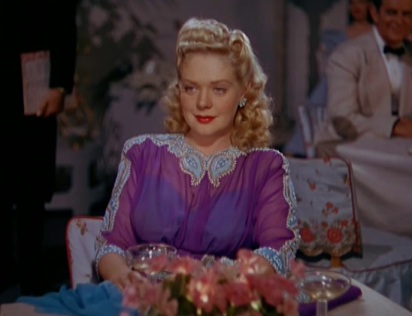 The songs aren’t anything to pack a suitcase for, but one of Miranda’s numbers, “Rebola a Bola” is a corker just to behold how blindingly fast the tutti frutti dynamo could rattle off lyrics in her Brazilian Portuguese. At the end, “The Nango” brings the smiling stars and a phalanx of vibrantly outfitted dancers together in one of those old-fashioned ‘leave-’em-grinning’ finales.

The fluff material is mediocre, but the four leads put ample energy into their capering: Faye and Payne are charming, deft Romero funny and elegantly smooth on his feet as the local lothario, Miranda a whirlwind of wackiness. The sets and costumes gleam in inviting color. 1941’s 20th most popular escape rang up $5,600,000. 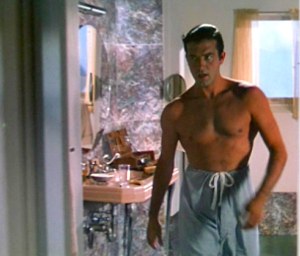 Time to bring on the beefcake 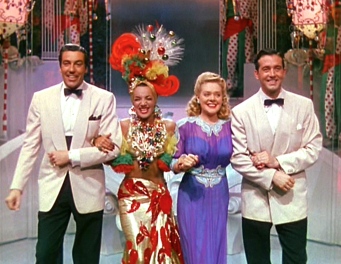