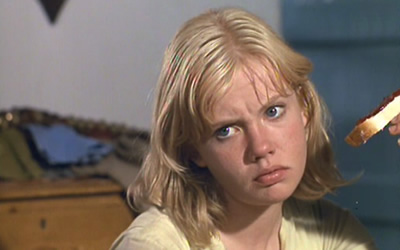 SKY WEST AND CROOKED was scripted by John Prebble (Zulu), who crafted Mary Hayley Bell’s story “Bats With Baby Faces” into form for John Mills only directorial effort, starring daughter Hayley. Reviews were fine, but box office was tepid, and when later in 1966 it arrived in America as the more prosaic GYPSY GIRL even with Hayley’s presence it didn’t find much audience, docking 117th place for the year. Whatever name it goes by, this is a charmer, with one of Hayley’s best performances, part of a well-picked cast, excellently directed by her dad.

Sixteen-year-old English country girl ‘Brydie White’ (Mills,19) is considered by the villagers to be “sky west and crooked” (‘not quite right in the head’). Father gone, her mother an alcoholic shut-in, Brydie’s a favorite of the local children but is scorned or dismissed by the adults. At least part of her strangeness—and some of their ire—stems from her involvement in the shooting death of a boy, her playmate, when she was a child. Though innocent of what happened, the trauma left her never quite caught up. Apart from the kids—who share her fondness for burying pets in the local cemetery—her only solace comes from the concerned parish clergyman and via a smitten young lad named ‘Roibin’ (Ian McShane), a member of a nearby transient gypsy caravan.

A deft blend of the poignant and the humorous, moving but not manipulative, comical but low-key, sensitively handled by director Mills; it’s too bad he didn’t do more in this line to go along with his busy acting career. Called on to plumb darker and more painful dramatics than before, Hayley’s wonderfully honest and expressive. She had more successful credits that year, in the hit comedy The Trouble With Angels and the superb drama The Family Way, but she’s even better in this overlooked picture. 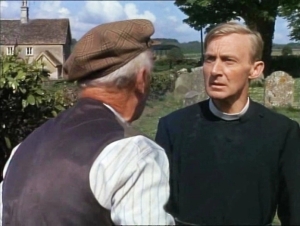 In an early role, McShane, 23, acquits himself nicely: this colorful romantic part moved him up a notch. There are markedly strong secondary characters, put over with great skill by Geoffrey Bayldon (the good-hearted clergyman), Annette Crosbie (film debut as the desperately lost mother), Laurence Naismith (the bitter father of the dead boy) and Hamilton Dyce (a nasty-minded gravedigger).

Malcolm Arnold did the music score; those familiar with the composer will detect his signature. Shooting in and around the little village of Badminton, located in Gloucestershire, Arthur Ibbetson’s clean cinematography tops it off. The running time on the currently available DVD is given as “approximately” 98 minutes: other sources have it 102, 105 and 106. 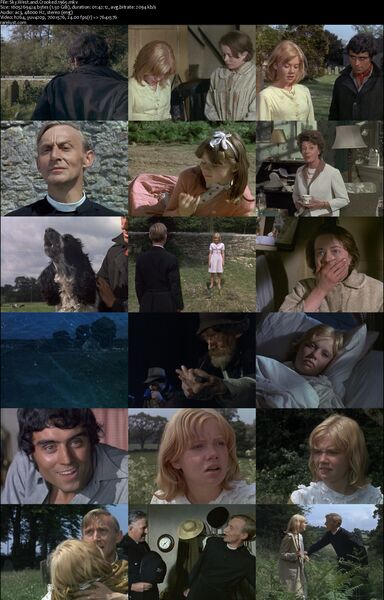