THE WRAITH, possibly because it’s so truly awful, has—go figure—acquired some of cult status in the decades since it skanked in 123rd place back in 1986. Hardly a hit, the $3,500,000 worldwide gross not enough to cover the $2,900,000 expended, but nonetheless sufficient to outperform movies that actually had quality, including Sid and Nancy, True Stories, Salvador and Desert Bloom. Other than being well-photographed and outfitted with some well-executed explosions, what’s on view is rotten, reeking roadkill.  When Clint Howard gives the best performance in your cast….

A young loner (Charlie Sheen) buzzes into a small Arizona town, and proceeds to make an enemy of the local hood (Nick Cassavetes), steal his girlfriend (Sherilyn Fenn) and decimate his gang of repulsive, witless punks. He accomplishes all this because he’s come back from the dead, an avenging space-wraith blessed with a Dodge M4S Turbo Interceptor. Randy Quaid plays the local sheriff. 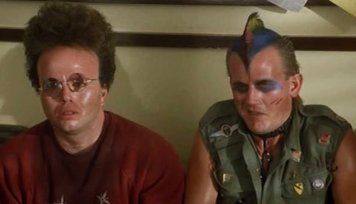 Abysmally written & directed by Mike Marvin, with atrocious acting from everyone (at least Clint has fun, outfitted with an Eraserhead hairstyle), with little indication here of better work to come. You know the bottom of the barrel? This is one of the smelly things lying there. *

Fanciers of period rock will note injected anthemic numbers from Motley Crue, Ozzy Osbourne, Robert Palmer, Billy Idol, Ian Hunter and Bonnie Tyler: they don’t help any. At least it’s all decently photographed around Tucson by Reed Smoot (Windwalker, Homeward Bound), though one of the camera operators was killed shooting one of the car races; another crew member left a paraplegic, a tragic toll to pay for a project so senseless, mean and stupid.

* Though he’s stuck in Nowheresville here, the same year Sheen did excellent work in Platoon. Cassavetes (son of John) would go on to become a reliable director, and Fenn—who’s embarrassing—would improve considerably. Even Quaid is bad, but he’d find better material than The Wraith in a dumpster. 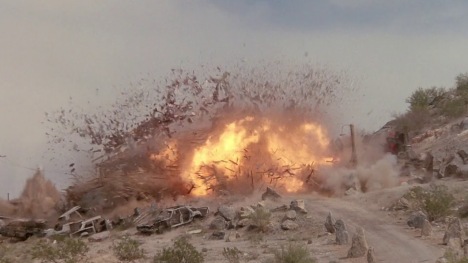