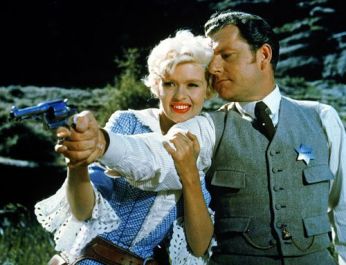 THE SHERIFF OF FRACTURED JAW sees England play with a western, done as a broad comedy, filmed in Spain, the mostly British cast headed by the always dependable Kenneth More in the title role. Jayne Mansfield co-stars, the most, uh, prominent of the handful of Americans along for the joke, with Hollywood veteran Raoul Walsh directing.

About to be disinherited if he doesn’t shape up, ‘Jonathan Tibbs’ (More) undertakes a trip from England to the colonies, in the form of the wild American West, where he intends to ply the family’s gunsmithing business to the pistol-packin’ locals. Since this is the US of A, it’s also packed with rifles and shotguns, used whenever someone has a problem, so Jonathan’s business prospects seem guaranteed. Yet he himself is a peaceful sort, doesn’t even know how to shoot. Heck, saloon & hotel owner/performer ‘Miss Kate’ (Mansfield) will lurn’im, and while they get around to it he becomes the resident lawman of the fractious burg of Fractured Jaw. Hee-haw! Sorta.

Teaming the unflappable More, proven adept at comedy as well as drama in pictures like Genevieve and The Admirable Crichton (a gem), with Monroe-shadowing pinup Mansfield makes an odd combo (he has talent, for one thing), and while he rises to the occasion with aplomb, she’s mostly pitiful. Her attempt at a western/southern/country-fried accent is fake enough to give you an earache. The outrageous Mansfield bod is on display, mostly in figure-sculpting outfits so tight it’s miraculous she could talk or walk, let alone do either with any semblance of reality. She also sings, except she…doesn’t, since for that reach she’s dubbed by Connie Francis.

The script by Howard Dimsdale includes some caricatures of Native Americans that won’t win any prizes for sensitivity, though to be fair, everyone in the range (or on it, in this case) is made to look extra goofy. While not nearly funny enough, it’s basically too good-natured and silly to really be offensive.

Spain posed as the American West for the first time, years before the spaghetti western craze began. 20th Century Fox had a prefabricated cowboy town built and shipped over to plunk down on the Spanish countryside near Aragon. Walsh brought it in for $700,000. Quite popular in Britain (#10 for the year), Cogerson has it coming in 47th in the States with a gross of $5,500,000; other sources indicate considerably less.