PAPER TIGER, adventure drama from 1975, did fairly well in Europe and Asia, but according to director Ken Annakin it was thrown away in the States in order to benefit a tax shelter deal. Flawed but engaging, it’s worth seeing for a couple of the actors and the location shooting.

‘Kulagong’, SE Asia. The Japanese ambassador hires an English tutor for his little boy. ‘Walter Bradbury’ (David Niven) is connected to royalty, politics and decorated war heroism (the last resulting in his cane-assisted limp). His impressive stories and stalwart presence are put to the truth test when revolutionaries kidnap him and the boy, who idolizes Walter and is himself no slouch in the bravery department.

Starting off with a nifty title sequence (a superb array of airplane journey & landing shots), the movie benefits throughout from atmosphere and some of the casting, then is hurt in the latter category by hopeful but hapless work from the eager lad picked for the key role of the boy. Ten-year-old Kazuhito Ando had a winning demeanor but knew exactly two words in English (“Hello” and “Goodbye”), and the rushed production schedule had him crash-learn on the job (much like the character). Unfortunately, game isn’t good enough: his tentative pronunciation can’t breach awkward to get to charming. As his father, legend Toshiro Mifune gets another instance of looking formidable but sounding wrong, his English dubbed by David de Keyser. *

The weaknesses are bested enough to rescue the project. Written by Jack Davies with Niven in mind, the part a fib-spinner caught by reality gave the 64-year-old actor his first decent role since Where The Spies Are, a decade earlier. He’s excellent, somewhat recalling his Oscar-winning turn from 1958’s Separate Tables, sensitively etching the portrait of someone who’s not who he claims to be, and forced to live up to his self-created reputation. The casting also gives 60’s crush-fave Irene Tsu maybe her best-ever go at being more than simply sexy. She plays the leader of the kidnappers; the part allows her to impress both in action scenes and dramatic moments. Another plus is veteran Hardy Kruger, on hand as a German TV journalist.  Annakin got the crucial atmosphere for fictional ‘Kulagong’ by shooting in the blistering heat of Malaysia (Kuala Lumpur, Malacca, the Cameron Highlands), with a few scenes (Walter’s bogus “war stories”) done in Bavaria, Germany. **

* At least Mifune’s dubbing here isn’t as awful as it was for Grand Prix (Paul Frees bringing up memories of Rocky & Bullwinkle) and Midway (Frees again).

** Annakin, from “So You Wanna Be a Director?”, his frank and bawdy autobio: “David used to religiously set aside one hour each evening to play with Ando. A wonderful gesture, I thought, from a great star. It certainly paid off in their relationship on screen. When you a star of David Niven’s magnitude, this kind of behavior could have been a great personal sacrifice, especially since there were two very attractive Australian air hostesses who pursued him most eagerly on their days off.” 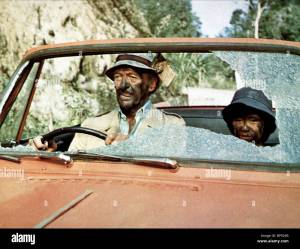 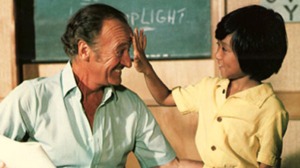