ENEMY OF THE STATE, a tech-toned candidate from the paranoia party, took some innocent— if not exactly ordinary—Americans and unleashed the malevolent marvels of the citizen surveillance complex on them, making a statement about the Orwellian tyranny of vanishing privacy, and doing so in the guise of a lickety-split action flick: subset Smith, William. *

Under orders from a ruthless officer of the National Security Agency, a stubborn senator blocking passage of controversial counter-terrorism legislation is murdered, his death made to seem a heart attack. When it’s discovered that the incident was inadvertently recorded by an unrelated party, the apparatus of the agency comes down hard, and by chance swoops another innocent person, and everyone connected with him, into the dragnet of dystopia. Chases, gunfire, car wrecks and explosions come fast & furious.

Within the opening minutes of the credits, the names of producer Jerry Bruckheimer and director Tony Scott flash past, letting you know from the get-go that plausibility will go out the window faster than those silly Constitution rights we’re supposed to have. Bruckheimer and $90,000,000 guarantee the ensuing property damage, Scott’s hyperdrive direction moves 132 minutes by in a blur. As written by David Marconi (with uncredited assist from heavy hitters Aaron Sorkin, Henry Bean and Tony Gilroy), the threats and wisecracks land on screenplay “beats” as practiced and expected as hearing a rock oldie for the 1000th time.

“The only privacy that’s left is the inside of your head.”

Fortunately, the cast is up to the mark. Will Smith, having honed his nice guy hero schtick with successive hits Bad Boys, Men In Black and Independence Day, is the man who represents “us” (if we were all high-powered criminal lawyers). Gene Hackman, proven dispenser of a no-shit attitude that rivals any actor in history, is the Guy to Know When This Happens. Of course they spar like cats in a bag. Regina King registers pluck as Will’s wife, Lisa Bonet (breathe deep, cold-hearted orb) gleams as his ex, caught in the crossfire. The passel of bad guys are led by Jon Voight (a role glove-fit with his publicly paraded lunatic fringing), and include a formidable lineup of actors who excel at playing creeps: Jack Black, Barry Pepper, Tom Sizemore, Jake Busey, Scott Caan, Seth Green among them.

“The government’s been in bed with the entire telecommunications industry since the forties. They’ve infected everything. They get into your bank statements, computer files, email, listen to your phone calls… Every wire, every airwave. The more technology used, the easier it is for them to keep tabs on you. It’s a brave new world out there. At least it’d better be.”

Reviews were positive, and the under-suspicion public ate it up, the Homeland take of $111,500,000 putting it #14 among 1992’s selection, with another $139,300,000 scooped elsewhere, all those ticket buyers in other countries having a laugh at us, while being tagged by their own spy masters. 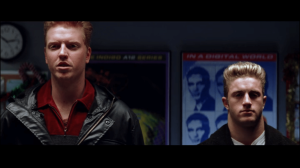 * Unsurprisingly, the humor-sensitive N.S.A. refused to cooperate with the production. That year, while Will & Gene fled the Feds, the fracturing of trust in New Pottersville—community, marital, corporate, governmental, institutional—was examined through The Truman Show, A Civil Action, Primary Colors, Bulworth and American History X, an estimable jury of peers.  So, are you a red pill patriot, or a blue pill slave? Being both, we suggest a purple one, to foster some 3rd-eye clarity.

At one point Hackman tells Smith “Fort Meade has 18 acres of mainframe computers underground. You’re talking to your wife on the phone and you use the word “bomb”, “president”, “Allah”, any of a hundred keywords, the computer recognizes it, automatically records it, red-flags it for analysis. That was 20 years ago.”

The last laugh is that now it’s been another 20 years since this you-can’t-escape thriller was made. How much tighter is the noose? At least 17 Federal agencies (and how many private corporations?) know you’re reading this.