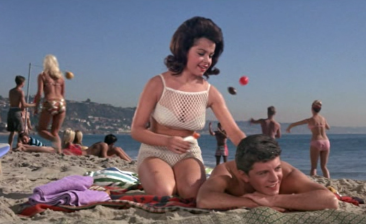 MUSCLE BEACH PARTY was fun—when I was nine years old, seeing it on a 1964 double-bill with the slightly better Bikini Beach. Going on six decades later, hitting the beach again with these mid-60s dinosaurs is an experience composed of plaintive nostalgia mixed with head-shaking smiles of disbelief over how truly inane they were.  Frozen banana popsicles of a time gone with the surf…

The “plot” leaves behind Bob Cummings and Dorothy Malone, the sacrificial adults from 1963’s Daddy-O Kahuna Beach Party, and brings the festive youths from that spawning ground into the first of a slew of sequels. Frankie Avalon and Annette Funicello lead the B-team into a stand-your-sand battle against a benchload of bodybuilders, with a few token grownups tossed in for whatever the sandal-sized budget of $150,000 could allow.

Frankie & Dee Dee bring along buds John Ashley and Jody McCrea as series regulars, and some lissome background surfer babes who would gyrate wildly when required. The frenetic hip action of Candy Johnson (more disco-clubby than volleyball teamish) gets her actual billing (in Beach Party she was the ‘Perpetual Motion Dancer’ on the end credits).

True Fact Alert: Johnson was the inspiration for the rock hit “I Want Candy”

Missing this time are Harvey Lembeck’s ‘Erik von Zipper’ and his motorcycle ‘Ratz’ (and ‘Mice’). Maturity is represented by Buddy Hackett as a zillionaire, Don Rickles (as ‘Jack Fanny’, trainer of the bicep boys), and Peter Lorre, 59, in one of his last appearances; he died two days before the movie came out. One highlight is the seriously hot Luciana Paluzzi, a year before she became reasonably immortal as Bond vixen ‘Fiona Volpe’ in Thunderball. She’s a Frankie-threat for Annette to pout over, the most serious plot issue.

Lead hulk among the oiled-up brigade is ‘Flex Martian’, played by Rock Stevens, who’d revert to his real name Peter Lupus for 7 seasons of Mission: Impossible. His followers are  ‘Biff’,’Rock’,’Tug’,’Riff’,’Hulk’,’Sulk’ and ‘Clod’.  Plus there’s Morey Amsterdam–but why? Eight songs are mouthed by various cast members including one from 13-year-old Stevie Wonder (billed as Little Stevie Wonder). “Running Wild”, done by Avalon, is not bad, the rest are. 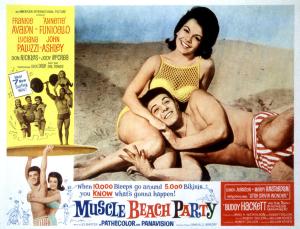 As with the original romp, the director is William Asher. Robert Dillon bears responsibility for the seriously unfunny screenplay. With a gross of $4,100,000 it touched 70th place for the year, then Bikini Beach, arriving four months later, tagged #15 and did three times more wallet (& brain) damage. Pajama Party showed up later in the year. So did the “Boss!” Ride The Wild Surf, not part of the series.