BEACH BLANKET BINGO —once you hear the beyond-inane title tune, you’ll grasp that “It’s A Small World” has some serious competition. William Asher directs. American-International lavishes $175,000 on the budget. New adults arrive. Old teens run wild. It’s the 4th in the series (5th if you cant’ count, and therefore count Pajama Party), landing on us in the spring of ’65. Ten songs. Two are actually pretty good; be thankful for small favors. Well, there’s also Lost In Space goddess Marta Kristen as a mermaid. 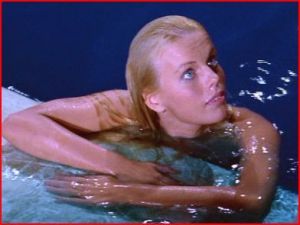 Frankie Avalon is quoted: “‘That’s the picture of mine that I think people remember best, and it was just a lot of kids having a lot of fun —a picture about young romance and about the opposition of adults and old people. There’s nothing that young people respond to more than when adults say `These kids are nuts,` and that’s what this movie was about. It was also fun because we got to learn how to fake skydive out of an airplane.” 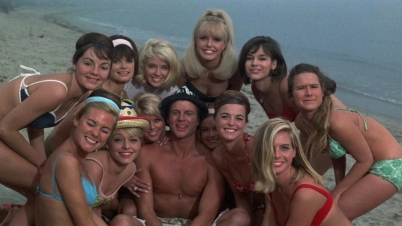 This time Annette Funicello’s ‘Dee Dee’ has her bouffant in a hive because Frankie is making goo-goo eyes at foxy singer ‘Sugar Kane’ (Linda Evans) and feisty lady skydiver ‘Bonnie’ (Deborah Walley and her winning smile joins the team). ‘Erik von Zipper’ (Harvey Lembeck) and his rowdies are at large, as are John Ashley, Jody McCrea and Don Rickles (as ‘Big Drop’). Paul Lynde does what he can to snark some laughs, special guest Buster Keaton endures the putrid material they handed him like the classy trouper he was.

Evans (22, about to start The Big Valley) had her singing dubbed by Jackie Ward, with a sweet number called “New Love”. Better is the “Dr. Pepper Girl” Donna Loren,17, with no dubbing needed, belting out “It Only Hurts When I Cry”, a winner: best thing in the movie.

Floyd Crosby was the cinematographer. Script by director Asher and Leo Townsend. With Timothy Carey (weird as always, and next to impossible to work with), Donna Michele as ‘Animal’ (raise your hand if you remember she was 1964 Playmate Of The Year), columnist Earl Wilson (looking so out of place he’d make Ed Sullivan seem loose), Bobbi Shaw, Patti Chandler, Salli Sachse, Burt Gilliam. 98 minutes long, it grossed $2,600,000, 89th place for the year.