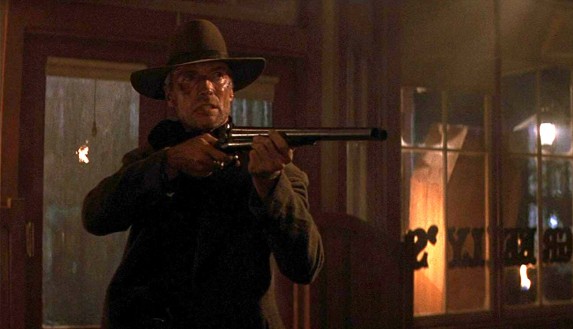 UNFORGIVEN, written by David Webb Peoples, had been around for 15 years, and on Clint Eastwood’s docket for nine before he finally produced, directed and starred in it, reaping critical laurels, industry accolades and a box office hit. Shot in Alberta, Canada for $14,400,000, it was #11 in the States in 1992, grossing $101,200,000, with another $58,000,000 internationally. The Academy Awards anointed it Best Picture, Director, Supporting Actor (Gene Hackman) and Film Editing, with nominations for Actor (Eastwood), Screenplay, Cinematography, Art Direction and Sound. That’s a lotta rawhide. It’s a palate ponder as to whether the beef behind the herd’s stampede of praise really cooked a steak with trimmings or just a good cheeseburger, minus milkshake. *

Wyoming, 1880. After cowboys disfigure a prostitute and the callous local sheriff lets the men off with a fine paid to the bar owner/pimp, the outraged gals, basically enslaved, secretly raise reward money as a call for vengeance. Among those answering the plea & fee are two retired gunslingers and a fresh punk out to make a name as a killer. Legend faces Fact. Truth is whoever tells it. Justice is whoever makes it so.

Eastwood is ‘Will Munny’, once a feared killer, now a broken-down sodbuster who has trouble getting on a horse. Will, old comrade ‘Ned Logan’ (Morgan Freeman) and a cocky poser (Jaimz Woolvett) self-daubed ‘The Schofield Kid’ aim to blast the perpetrators and collect their due. Facing them in the muddy hamlet of ‘Big Whiskey’ are calmly vicious sheriff ‘Little Bill Daggett’ (Gene Hackman) and his deputies. Little Bill has already dealt a visit from renowned pistoleer ‘English Bob’ (Richard Harris).

Bleak and brutal, it’s well-acted and photographed, has some excellent dialogue exchanges with the hard-case men justifying their self-serving codes, to others and themselves, and has a great mop-up finale. Overlong at 130 minutes, despite the insistent drumbeat of how “revisionist” it is, it’s essentially another variation on the embittered outcast/avenger Eastwood inhabited in film after film, with a potent (though hardly fresh or original) deck shuffle of morality and hypocrisy regarding justice and how to apply it. Clint-fawning critics tripped over their superlatives to over-imbue it with “depth”, and the industry prize givers saw fit to give the veteran some overdue recognition, albeit with overkill, in a year with not particularly strong competition.

Eastwood’s good (though hardly Oscar-worthy), Freeman strong as ever, Hackman takes top honors as the bemused bully with a badge. Canadian TV actor Jaimz Woolvett, 24, makes an impressive feature debut as the bluff tough who’s all show. Harris has what amounts to a cameo, and delivers with his signature flair. The final shootout unloads some needed catharsis after enduring all the off-putting, one-sided ferocity to get there.

* Clint’s last ‘official’ western is a good, well-crafted movie, but for the love of Earp, holster the hallelujahs, already. The critical gush from tenderfoots and toadies was so extreme you’d think genre-amnesia was a new kind of reviewer malady. This Clint deputy will side with The Outlaw Josey Wales any gunfight of the week. And The Good, The Bad and the Ugly is a helluva lot more fun.

If you want to play “serious” about how “honest” this was, digest that Eastwood, Hackman and Harris, all 61, are cannon-range from likelihood as frontier badasses who would have lived to such a ripe age. Freeman at 54 would still push it. Of course, forebears Wayne, Mitchum, Widmark, Lancaster, etc., did too, in their day, but then those oldies of theirs weren’t stamped “the way it was” by knobs who often seem to know as little about movie lore as they do about history.

Those danged Oscars: nine nominations for Unforgiven and The Last Of The Mohicans rates one? Magua is not pleased.