KINGPIN, a proudly shaggy underdog comedy from 1996, woofs from the “bad puppy” litter of poor-taste mutts that either tickle or repel depending on the viewers tolerance for full frontal rude & crude. Underrated and underseen at the time, it’s gained a degree of cult status, befitting its literally underhanded hero, a real ‘Munson’. *

In 1979 Iowa’s pride, hotshot bowler ‘Roy Munson’ (Woody Harrelson), on his pro debut, beats conceited champion ‘Ernie McCracken’ (Bill Murray), then makes the mistake of letting “Big Ern” talk him into hustling suckers. Roy can make strikes to spare but he’s not the brightest pin in the alley: Ernie’s scam ends up with Roy losing his bowling hand, and his career with it. In 1995, washed up Roy, with his hook-hand and rubber cover, barely ekes by until he encounters amiable Amish amateur ‘Ishmael Boorg’ (Randy Quaid) who is a natural-born bowler, though not well-equipped when it comes to things like thoughts. After hitting the road, they’re joined by sex bomb ‘Claudia’ (Vanessa Angel) fleeing her thug boyfriend. Much is shared on the road to Reno, where Roy and his protégé will ultimately face off against the daunting, taunting legend Big Ern (and his hair).

Directed by brothers Bobby & Peter Farrelly, written by Barry Fanaro and Mort Nathan, its aversion to decorum would make Mel Brooks blush, but it’s done with such cheerfully absurd intent that its very offensiveness has a harmless charm. Everyone dead-pans to a tee: Harrelson and Murray are hilarious. Quaid has doofiness down pat, and lust-inducing Angel is a devil of desire. Gags galore. Fun soundtrack, with a great grinning finish of Blues Traveler singing “But Anyway”. 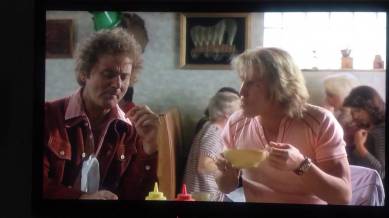 If you can’t trust Bill Murray…

* To mangle a mumble from Col. Kurtz, “the humor…the humor…”——when it comes to this one, one person’s merry is another’s mean; the thin skinned might look elsewhere. Granting the mangy pedigree, finding it nonetheless funny, your host (who bowls about once every ten years) recommended it to two different couples, each pair longtime friends who’ve shared many a movie laugh with me over years.

All of them smart, kind and thoughtful subjects. Couple #1 were so repelled they cut out early, puzzled why I’d toss a barf salad upon them. Couple #2, primed for silly, got the same wicked kick out of it as yours truly. Go figure.

Co-director Peter Farrelly: “I love Kingpin. That movie was the biggest disappointment we ever had in our career. They opened it up in the middle of the 1996 Olympics, had zero ads during the Olympics and the box office in the States was a fifth of what Dumb and Dumber did. It was crushing. And then you also start feeling, shit, maybe it’s not that funny. It was a bummer. It wasn’t until about six to eight months later when it came out on video that it became a huge hit. I have more people approach me about Kingpin now than any other movie”. Strike!