THE PROWLER let nervous 1951 have it in the two-faced kisser. Voyeurism. Adultery. Corruption. Deception. Murder. What, no picnics?  Notable talent targets of the witch-hunt years sneak in bitter payback about the seamy flipside of the American Dream, and what some will do to grab it. Playing straight is for suckers. The out-for-himself protagonist justifies his ad hoc philosophy with “So what? So I’m no good! Well, I’m no worse than anybody else! You work in a store, you knock down on the cash register. A big boss, the income tax. Ward heeler, you sell votes. A lawyer, take bribes. I was a cop… I used a gun.”

Answering a woman’s call about a prowler outside her swank Los Angeles home, patrolman ‘Webb Garwood’ (Van Heflin) sees more than a little he likes about ‘Susan Gilvray’ (Evelyn Keyes), attractive and vulnerable lady in distress. He begins paying unsolicited and insinuating repeat visits to “check on her” when her husband, a local radio personality, is “live on the air.”  Webb deduces that Susan is ‘live in the living room’.  Deduction becomes seduction which begets the hellbound handbag demanded by noir’s anvil of irony. 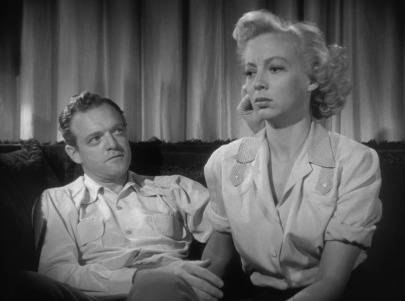 Heflin excels as the relentlessly amoral Webb, who hates being a cop (and working, for that matter) but is shark adept at smelling emotional clues, circling prey with a predator’s instinct. Keyes, an undervalued actress, makes Susan sincere, sexy, sensitive and sad. The tension begins to torque from the first voyeuristic scene in posh but closeted civilization and ratchets up to the inexorable reckoning in a literal and figurative cemetery for forlorn hopes, the ghost town of Calico, in a mountainous part of the Mojave Desert.

Directed by Joseph Losey, the accusatory script was written by the blacklisted Dalton Trumbo, with screen credit fronted by Hugo Butler, who was then blacklisted himself, along with director Losey. Thumbing not a nose but a mouth at the censorious Red-baiters, Losey used Trumbo’s voice for the husband’s offscreen character. *

Cogerson has it sneaking into 149th place for its year, grossing $2,200,000. The 92 minutes of nastiness is effectively scored by Lyn Murray, with supporting roles filled by John Maxwell, Katherine Warren, Louise Lorimer and Madge Blake. George Nader has an uncredited bit as a photographer, lasting about two seconds.

*  Losey also directed a solid remake of M, released that year before he self-evacuated to Europe. Robert Aldrich was assistant director. John Huston helped produce (sans credit), hoping to give ex-wife Keyes a decent part before he began tackling The Red Badge Of Courage.

Present day viewers will choke on their mortgage when they hear the comment that Susan’s large Spanish-style home in (some posh part of) L.A. would cost “35 or 40 grand in this market“, about the price of a mailbox there today. 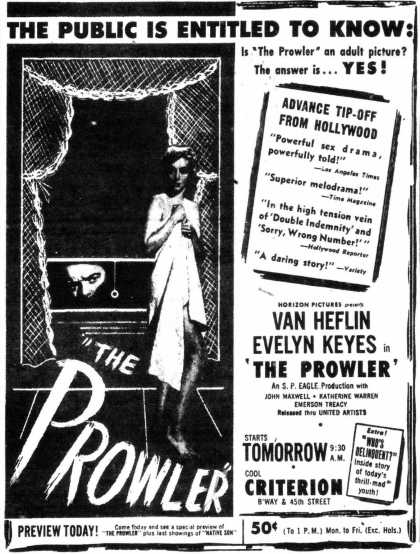