THE TALENTED MR. RIPLEY, written by Patricia Highsmith in 1955, the first of her five ‘Ripliad’ novels about a slippery American sociopath plying his sick wiles in Europe, was filmed five years later in Italy by French director René Clément as Purple Noon, with Alain Delon and Maurice Ronet. That acclaimed take gave way four decades on to this $40,000,000 English-language version in 1999, written & directed by Anthony Minghella. A critical and popular success, knocking back five Oscar nominations, the silk-spun web of deceit stole 26th place at the U.S. box office, $81,298,000 from the States part of a worldwide gross of $128,800,000. Crime pays, and if sneering rich swine are offed in the bargain, the shrugs are on the house.

“I always thought it would be better to be a fake somebody than a real nobody.”

Taste-tacky but tactically tricky ‘Tom Ripley’ (Matt Damon) is a social climber who makes a quick study of social graces on his claw up the caviar chain, undaunted by scruples when his ascent clambers over targets on the game board.  Impersonation is key; he assumes an identity and pretends at being part of a well-heeled, ill-bred pack that can smell money—and the lack of it—and whiff out breeding from bravado. “Fool me once”, as one of the more notable curs famously fumbled, and Tom takes the admonition to a knife-edge. In Italy, befriending arrogant ‘Dickie Greenleaf’ (Jude Law) and his good-natured fiancée ‘Marge Sherwood (Gwyneth Paltrow), Ripley carries off his masquerade, but Dickie’s contemptuous party pal ‘Freddie Miles’ (Philip Seymour Hoffman), sniffs a rat (from below decks, as it were) in Tom, whose trawler net of lies also draws in giddy socialite ‘Meredith Logue’ (Cate Blanchett). *

“Don’t you just take the past and put it in a room in a basement and lock the door and never go in there?”

Readers of Highsmith’s Ripliad differ over who best interpreted her chameleonic creep, a deceitful murderer as anti-hero. Some favor uber-handsome Delon from the 1960 caper; odd hands are raised for Dennis Hopper’s mumbling as The American Friend; others bizarrely taken with the icy ick of John Malkovich in 2002’s Ripley’s Game. We’re satisfied playing Damon’s game in this opulent effort, particularly in his minutely etched ‘tells’ of panic when Tom is found out and when his dead-eyed self-preservation instinct locks into gear. 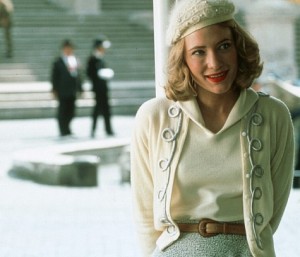 Paltrow and Blanchett are poster pick casting for “poor little rich girls”, essaying oblivious but not unkind guilelessness, cut to the quick on betrayal of assumptions and security. More painful, in a nastier vein, Law and Hoffman nail entitled WASPy arrogance to the mast (of a yacht, of course), merrily mean-spirited blue-bloods begging for sudden status therapy.

The lush production design recreates the mid-1950s see-Europe-and-play atmosphere enjoyed by those who could make the trip, John Seale’s expert cinematography bathing in location shooting in Positano, Rome, Venice, Ischia and Anzio.  Unobtrusive music scoring is deployed to effect by Gabriel Yared.

“Why is it when men play they always play at killing each other?”

* George Bush the Younger, on 9/17/02: “There’s an old saying in Tennessee—I know it’s in Texas, probably in Tennessee—that says, ‘Fool me once, shame on… shame on you. Fool me—you can’t get fooled again.”  Compared to what we endured from another classless class parasite later, it’s practically Shakespearean. Welcome to Ripleyvania.

Speaking of entitled s.o.b.’s, in need of a shave by guillotine, if you met a guy named Dickie Greenleaf, shouldn’t you just sock him in the mouth on principle? 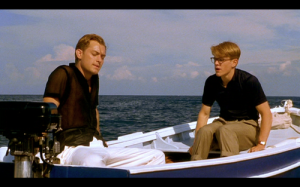 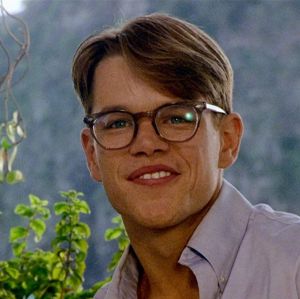 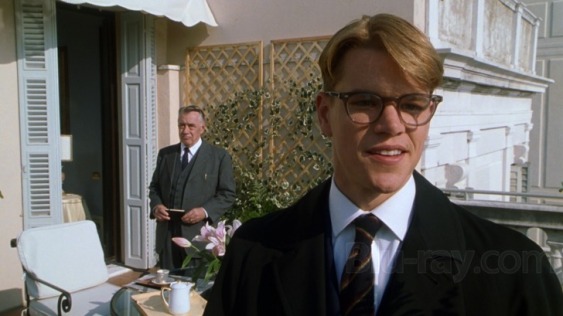