Ripley’s Believe It NOT

RIPLEY’S GAME, a slight story with no big stars, large-scale crowd scenes, detailed period recreations or elaborate effects somehow cost $30,000,000 to make back in 2002. It made $6,220,970 in Europe, then went unreleased in States, dumped straight to cable & DVD, a financial bomb. It did garner positive reviews, including Roger Ebert deeming it “Great”. From this end of the couch, utter mystification descends. Not about the studio’s cut-losses decision to keep it from emptying theaters, but over how such an unbelievable, pretentious, boring piece of schlock could get any applause, for anything.  Those expecting something close to the tightly crafted, smart, elegantly acted, psychological chill effect captured in The Talented Mr. Ripley will gnash teeth waiting for minute 110 to arrive, if you can stay awake to get there. The adaptation of the third novel in Patricia Highsmith’s “Ripliad” had already been done, 25 years earlier, and better, as The American Friend. 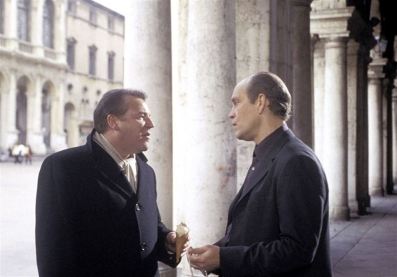 Successful sociopathic schemer ‘Tom Ripley’ (John Malkovich) is irked when his plush lifestyle in an Italian villa, collecting arty baubles and idling with his dead-from-the-neck-up wife, is rudely interrupted by coarse colleague ‘Reeves’ (Ray Winstone), who enlists Ripley to provide a patsy assassin to knock off a rival gangster. Avenging a personal slight, Ripley selects a neighbor, leukemia-stricken ‘Jonathan’ (Dougray Scott), desperate for money to leave his wife and child. 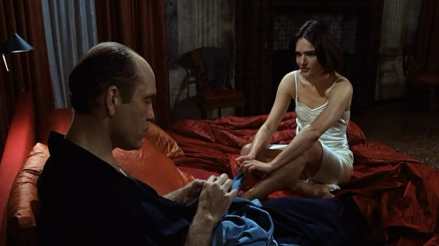 One unsexy sex scene coming right up (along with your lunch).

Malkovich projects Ripley’s cobra coldness, but Ripley is also supposed to possess charm, not a Malkovich-served dish in the best of scripts, and certainly not in this wank, co-written by Charles McKeown, displaying none of the barb wire he brought to Brazil and The Adventures Of Baron Munchausen. Helping/hindering with the writing was the director, Liliana Cavani, best known for The Night Porter—no thanks—and the notorious yuckbath La Pelle/The Skin. Cavani directed 2/3 of it, then Malkovich took over and finished it off, sans credit. Neither succeed, either with whatever is meant to be darkly humorous (laugh-absent), the sexy stuff (turn-off time, unless watching Malkovich bite someone on the butt is your idea of kink), the tension (Pacing meets Yawn on the Road to Anger), or the performances.

Acting: fake being charmed by someone who would repel a reptile

Malkovich is John-to-the-mannered-borne, making Ripley so jaded he may as well be a blurred photo of a statue in a basement. Winstone is adroit yet adrift with another off-putting Brit brute, cursed by lazy writing that has him dropping f-bombs like a one-man air raid. Chiara Caselli is lifeless as ‘Luisa’, Ripley’s decadent wife–she’s a harpsichord virtuoso, hang on to your excitement. Dougray Scott is just embarrassingly bad. Struggling against the material, Lena Headey, as the patsy’s wife, brings some life to a dead zone, but it’s not enough to sway the wrecking ball of smug gloom swung by everyone else involved. The violent action scenes make little spatial sense, and verge on the ridiculous.  Filmed in Germany (Berlin and Hamburg) and Italy (around Veneto), making little use of the locations. Scored by Ennio Morricone, to no discernable effect. A Ripley-off.

Idiotic scene: play a game while expecting hitman squad to show up. Do not check windows. Rip a new one.