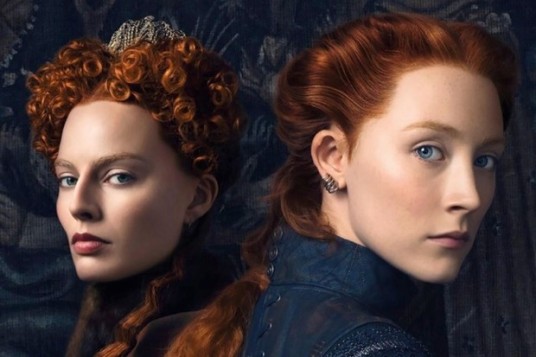 MARY QUEEN OF SCOTS is graced by expected exemplary work from two of the best actresses 2018 could offer, and has the laudable production embellishments summoned by period pieces.  But this go at telling the story of “sister” sovereigns at dynastic odds in the pox-ravaged 16th century suffers from the 21st century brain-blight of political correctness. Direction and script belabor accuracy, saddle the actors and douse audiences with well-intended but ill-considered choices in casting and messaging. That selective, irritating, trendy nonsense hamstrings credibility and hampers enjoyment, risking the kind of response that in earlier times would loose a barrage of turnips from the gallery, and hoots over ‘Mary’s Stream of Woke.’  *

In the mid 1560’s, two determined young women, cousins, rule neighboring monarchies, each realm riven with constant infighting from advisors and plagued by religious divisions between Protestants and Catholics. Younger, thrice-married (none happily) Queen Mary I of Scotland (Saoirse Ronan) and England’s never-wed Queen Elizabeth I (Margot Robbie) desire to get along, but scheming men, unyielding dogmas, and divisive lineage issues pit them against each other. Neither of the privately anguished, publicly strong-willed rulers can or will back down. Principle, duty, and pride set the course for a reckoning.

“I was jealous. Your beauty. Your bravery. Your motherhood. You seemed to surpass me in every way. But now I see there is no cause for envy. Your gifts are your downfall.”

On the plus side, first are foremost are cinema sovereigns in the personages of Ronan and Robbie, thespian royalty as screen-commanding as any top tier talents who reigned before. Per the story focus, Ronan naturally gets more play, and maligned Mary has one dramatic upset after another to try and surmount, though Elizabeth’s ghastly siege of smallpox is no trifle (Robbie’s makeup is vivid). They’re both splendid, and, while it doesn’t jibe with history, are given a strong confrontation scene; allowable dramatic license. Registering impact in the heavily bearded supporting array are Jack Lowden as Mary’s swinish husband #2, and David Tennant, eyes glowing with zealotry and spite as John Knox, influential theologian (as in ‘religious fanatic’), one of the many cruel men who alternately sully, betray (some repeatedly), even assault the outnumbered but not outclassed queen of the Scots. There’s a quietly stirring scene with Mary at the head of a victorious army. The last act skips over the 19 years of her imprisonment to a somewhat blunted finish.

“We have a scourge upon our land. ‘Tis worse than pestilence and famine. ‘Tis a woman with a crown.”

Then there’s the down side.  Beau Willimon (The Ides Of March, House Of Cards) based his part accurate/part speculative script on “Queen of Scots: The True Life of Mary Stuart” by historian/biographer Dr. John Guy. Then, in her feature debut, English theater director Josie Rourke stormed off campus from the logical and overdue feminist sensibilities of the script—it is, after all, about two isolated women trying to survive in a sea of conniving and brutal men—into the arrogant never-never land of Wokedom. Her marching orders: “I was really clear, I would not direct an all-white period drama.” Right, especially about a time and place where the infinitesimal number of non-white people in the British Isles were exotic objects of curiosity—not an ocean or 450 years close to being forthright advisors to Elizabeth or BGFs with Mary. In a stylized situation (Hamilton, for example), having Caucasian characters played by non-white actors fits the piece, but in a treatment posed to be a serious historical drama, the attention-jerking rainbow casting is a idiotic distraction. In this instance, who, exactly, is it for?   Rourke also has Mary’s Italian courtier David Rizzio swishly cavort in dresses, cooing to her that he feels like a sister. Mary confides he makes “a lovely sister” and should be who he feels like because he can be “free” around her. Utter gibberish. The odds that a Catholic monarch in the 1500s would blather a 21st century statement of inclusion to an underling–let alone someone who slept with her husband (!, alas, another script invention), are higher than Gullible’s Tower.  In f further fact fudging, rather than the rakish, Duke-eating dandy of the screenplay, records indicate Rizzio was a short, ugly hunchback. The actors are fine, the wishful thinking can jump in the moat.

To rack Henry II from Becket a turn, “Will no one rid us of these meddlesome cancellers?”

Lester, Chan and Cordova: good actors in the wrong movie

Though critics praised the actresses, there were sniffs and snorts aplenty over the approach. Industry peers recognized skillful detailing with dutiful Academy Award nominations for Costume Design and the Makeup & Hairstyling, but financially, it sank with the paying commoners. The estimated $25,000,000 budget (with presumably that much more for prints & advertising) was dethroned by a worldwide gross of just $46,400,000, a royal fizzle.

* Previous runs at sorting out the lioness fight—-in 1936 John Ford directed Katherine Hepburn in Mary Of Scotland. It lost money (tanking 75th that year) and was one of the projects that saw Hepburn labeled as “box office poison”. More successful, 1971s Mary Queen Of Scots, with Vanessa Redgrave and Glenda Jackson got five Oscar nominations. Cogerson has its boxoffice position wedged between Bananas and The Big Doll House. In 2013, the Swiss-made Mary Queen Of Scots featured Camille Rutherford, drew decent reviews and zip attendance. It bore the arch tagline “A queen who lost three kingdoms. A wife who lost three husbands. A woman who lost her head.”  The newest version ran aground on un-regal 102nd place in ’18, between Hunter Killer and Super Troopers 2.  Cate Blanchett’s Elizabeth: The Golden Age had Mary as a subplot plotter, done up well by Samantha Morton.

Tennant as Knox, who’d be at home in Q-anon