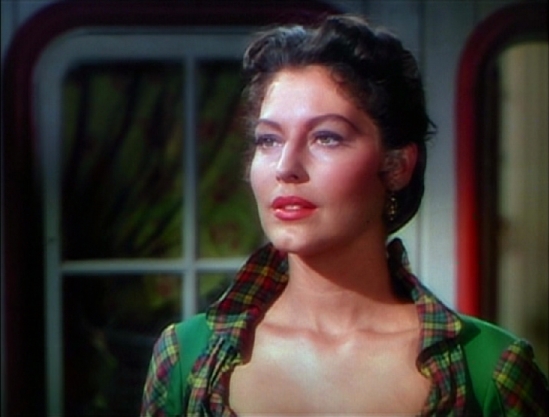 SHOW BOAT, the splashy 1951 MGM Technicolor remake of the groundbreaking Kern/Hammerstein musical, was an even bigger hit than the one made in 1936. Produced for $2,389,000, it became 51’s 3rd biggest draw, grossing $15,100,000, and pulled Oscar nominations for the cinematography and the music scoring. Despite some attractive aspects, it’s a considerably lesser film than the earlier version, which was more challenging and thematically richer. 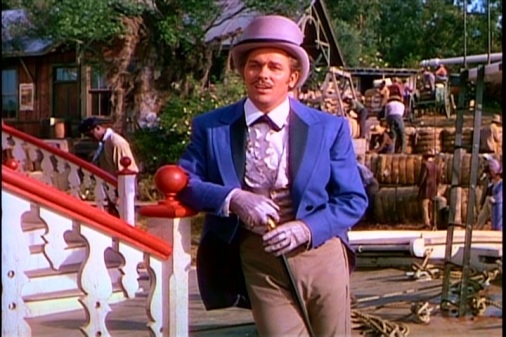 In the remake, Kathryn Grayson is the songstress daughter of a showboat family who marries a gambler with more charm than luck, played by Howard Keel. Ava Gardner is the gal whose life is turned inside out when her mixed-race heritage and marriage is revealed. Joe E. Brown is the ‘Cap’n of the ‘Cotton Blossom’.

Directed by George Sidney, it moves smoothly as a display of talent but shorn of depth it doesn’t land with sufficient emotional resonance. The new screenplay by John Lee Mahin saps the racial complexity, and period authenticity is lacking in favor of bright hoopla. The blackface number that marred the ’36 version is mercifully gone, but so is most of the African-American input: characters ‘Joe’ and ‘Queenie’, integral before, are barely present this time. William Warfield gets a strong rendition of “Ol Man River”, and that’s about it. While the miscegenation subplot is still there, it’s diluted so much that even though the packaging gleams with Technicolor so lush it can restore your vision, when it comes to insight the show literally pales in comparison. *

Impressive dance numbers featuring Marge & Gower Champion are added, numerous other characters are reduced. The charismatic Keel is a great improvement over the bland Allan Jones from the first film. Ava Gardner does well as Julie (her perfectly fine singing voice was re-dubbed by Annette Warren), and her closeups in Technicolor define”ravishing”. It’s a toss-up as to whether she looked more beautiful in this or in the gem Pandora And The Flying Dutchman, released the same year. 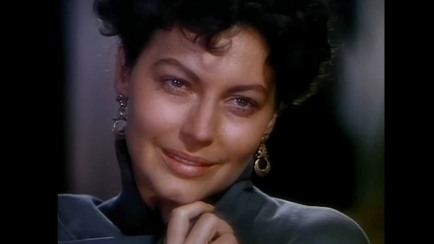 * Though in 1951 things were a mite improved since Edna Ferber’s 1926 novel and the 1936 film, Jim Crow bigotry/apartheid still ruled much of the country and miscegenation laws were still in effect in some states. Alabama was the last holdout, finally giving up in 2000, 309 years after the first law was enacted, in Maryland in 1691.

Meanwhile, the dynamic Paul Robeson had been blacklisted the year before this came out. Fans of “Old Man River” (who isn’t?) can choose their favorite rendition. Besides Robeson (whose version is more dramatic, visually) and Warfield, there was a surprisingly fine job done by Frank Sinatra, no less, in Till The Clouds Roll By —in a white suit with an orchestra in white suits–that 1946 movie, a bio of Jerome Kern with a Show Boat segment, also featured Grayson as ‘Magnolia’, and Lena Horne as ‘Julie’. Judy Garland was in it as well, and we mention her because Garland’s live version of “Ol’ Man River” done for her TV show in 1963 is pretty much fabulous.