THE BEST OF ENEMIES—-before director Guy Hamilton knocked a grand slam in Goldfinger, one of his efforts was this forgotten 1961 comedy of military errors set in Abyssinia (now Ethiopia) during WW2. The idea of comedies set during war isn’t all that odd when you consider that along with everything else that’s bad about it, war is nothing if not absurd. This well-mounted, oddly neglected entry is one of the better ones in that martial mini-genre. * 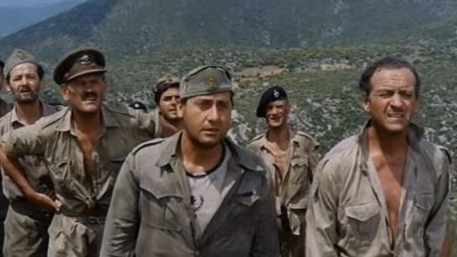 1941. British and Italian forces struggle for control of the desert in “Italian East Africa”. British army ‘Major Richardson’ (David Niven) is captured by Italians under ‘Captain Blasi’ (Alberto Sordi). Both men have duty to perform, but they’re also reasonable: Blasi allows Richardson to get away, hoping the Englishman will persuade his superiors to let the Italian unit retreat unmolested. That doesn’t work; Richardson and his troops are duly sent to capture Blasi’s outfit. A cat & mouse situation develops where the gradually friendlier enemies must team up to survive when the local tribesmen outwit and trap them all. A little soccer, shared photos and mutual humiliation show up the whole enterprise for the ironic waste of possibility that it is.

Filming in Israel, producer Dino De Laurentiis saw that it was impressively mounted, and director Hamilton had a crack cinematographer in Giuseppe Rotunno. Nino Rota composed a jaunty score. Jack Pulman’s script doesn’t stoop to stereotypes, and it arranges for good interplay between Niven and Sordi. They’re both in fine form: Niven droll without being supercilious, Sordi earthy without getting hammy, and each affecting enough of an air of command that you believe in their characters. There’s a solid supporting cast. Though the situations are amusing, they’re cleverly staged and wisely played close to the vest so it doesn’t degenerate into cheap slapstick: enough of a serious undercurrent is present to make us care what happens to these guys. Ostensibly opposed to each other because of politics and uniforms, their common humanity shares the idiocy of fighting over territory they neither belong in or care about. Hamilton and his effects crews do stage a quite impressive nighttime brush fire sequence that figures in both embarrassing each bunch of soldiers and serving to bring them together. 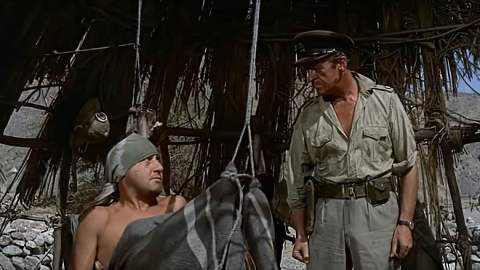 * Getting humor out of something horrible requires a deft touch with farce. ‘Service’ comedies are something many people can relate to whether they’ve been in uniform or not, since they deal with the hassles of bureaucracy (gumming up everyday civilian life, dealing with jobs, institutions, bosses, co-workers) or physical schtick (being a screwup in basic training, shaping up to come out a winner, get promoted, boff the Colonels secretary, etc.), but actually shooting at each other raises the good taste stakes. On the deck: Kelly’s Heroes, What Did You Do In The War Daddy?, Up Front, Operation Petticoat, M.A.S.H., Catch-22, Jojo Rabbit, Operation Dumbo Drop, Three Kings…