THE DECKS RAN RED—-“It had never entered my mind that the woman would be so sensuous, so exotically beautiful. I knew then that I had started my command with a dangerous error of judgment.” It helps to say something like this with the voice of James Mason.

A forgotten entry from 1958, this flawed but still compelling thriller about a mutiny-hijack was written & directed by Andrew L. Stone, producing the $593,000 item with his wife Virginia, who acted as film editor. Ranking 95th place for the year, it was hardly a hit, yet it still managed to claim $2,300,000. The Stone’s sea saga was loosely based on an actual mutiny that occurred back in 1905. As Mason intones on the intro “There was a ship named the S.S. Berwind. This is the story of that ship… A story which actually happened… A story of the most infamous, diabolically cunning crime in the annals of Maritime history.” 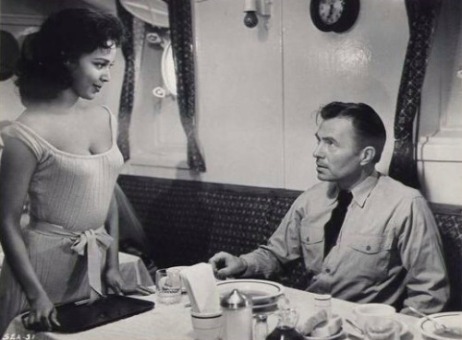 When the captain of a cargo vessel dies suddenly, the career-advancing chance to fly out to New Zealand and take command is given to ‘Edwin Rummill’ (Mason). His first look at the Jonah-invoking vessel is not reassuring: “The S.S. Berwind: as dirty, as miserable, as rusted-up an old tub as I’d ever seen. The nearer I approached her, the more profoundly depressed I became. There was an unhealthy atmosphere of tension. I was conscious of it even before I reached the deck. There’d been a breakdown in discipline. I’d have to take a firm hand.” 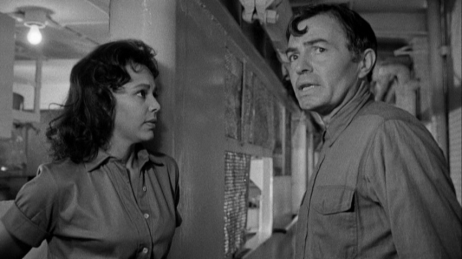 No kidding, as Rummill not only has insubordination to deal with, he’s forced to take aboard the  new cook’s knockout of a wife (Dorothy Dandridge), her sultry presence further raising the temp in an already simmering stew. Asking her to tamp down her charms is one thing, but the real fret is soon revealed when surly louts ‘Scott’ (Broderick Crawford) and ‘Martin’ (Stuart Whitman) unleash their plot to take control of the ship. They’ll kill everyone who resists, then sit out the waiting period to claim salvage rights (Scott’s been digging into maritime law). Things get brutal. 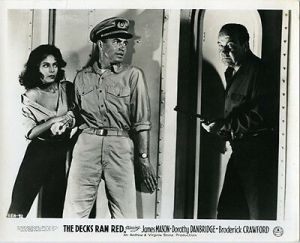 Though the script is leaky and some of the lesser supporting players are not shipshape, there are a number of saving graces that keep the 84 minutes fairly tense. Shot on a former Liberty Ship, the confined spaces of the vessel itself serve as a brooding, menacing character. Mason gets a rare chance to do some action work, which he handles adeptly, Crawford brings on his brute persona to good effect, and any chance to see Dandridge smolder is a pleasure: her sex appeal is a “Life the man-boats!” situation. *

Crawford goads Mason with “Rummill, you’re no sailor. You’re like the rest of those panty-waists on luxury liners: cocktail parties, watercress sandwiches and drinking tea. That’s your racket!”  To which Mason ripostes “Looks like it’s going to be your brawn against my brain, doesn’t it?”

Sure, it’s on the overcooked side, but the tough little flick has a lame rap which it doesn’t deserve. With Jack Kruschen, John Gallaudet, Katherine Bard, Barney Phillips, Joel Fluellen and Hank Patterson (aka ‘Fred Ziffle’).

* Mason and Dandridge were both in the big ’57 hit Island In The Sun. Mason then worked with director Stone immediately prior to this on the well-received thriller Cry Terror!

Stone, on Mason: “You always knew where you stood with him and he would never let you down. The pictures we made together could maybe have been a bit better, but we were very pressed for time and James was always there on cue, always professional…But there was something churning inside of him, and although he never let it show in his work, you could always sense it. He was a tenacious son of a bitch, and a great survivor, but I think he was maybe too intelligent for some of the work he had to do in movies.”

And about Dandridge: “She was extremely professional. I never worked with any star that I liked better or was more competent…”

The Stones later made use of Oregon forest blazes and full-scale destroyed a train & trestle for Ring Of Fire, then most spectacularly shot aboard an ocean liner as it was actually sunk on The Last Voyage.

Critic Andrew Sarris on the Stone duo–“Andrew Stone and his fantastically helpful wife-editor have evolved an entirely different ethos of film-making.… If they want to blow up a train, they blow up a real train. If they want to sink an ocean liner, they sink a real ocean liner.… If the Stones had made On the Beach (1959), none of us would be around to review it.” 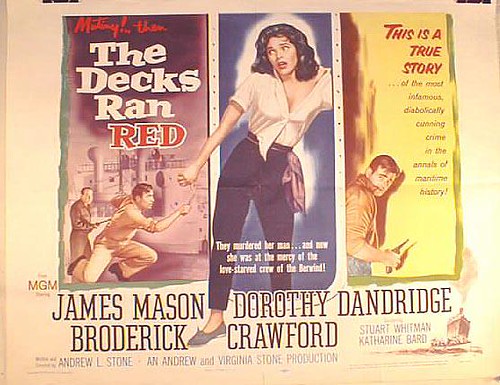