KNOCK KNOCK on Keanu Reeves noggin to see if he can tell you what the hell appealed to him about this wretched p.o.s. other than the chance to do a three-way sex scene with Lorenza Izzo and Ana de Armas? Okay–I just answered my own question, but still…

Eli Roth, the shockmeister who so thoughtfully checked us into Hostel, directed and co-wrote this soul-crushing 99 minute depravity dance, and cast his recently-wed wife (Izzo) as one of the psychos who knock Keanu for a loop.

Wife & kids at the beach during a rainy Father’s Day weekend, architect ‘Evan Webber’ stays home to work. When two soaked, shivering young women, ‘Genesis’ (Izzo) and ‘Bel’ (de Armas), knock on his door, saying they’re lost while trying to find a party, he lets them in to use the internet to contact their host. The innocent request for help turns into a seduction as Evan’s resolve crumbles under a double-vixen tease attack. Returning the next night, the girls break in, knock him out, tie him up and commence to torment him, wreck everything in the house and, with unrestrained glee, basically destroy his life. The End. 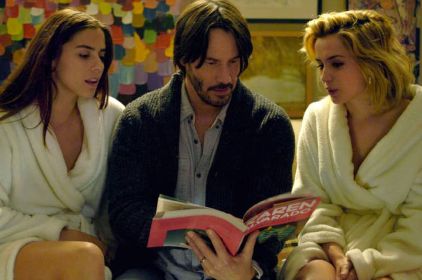 Aside from getting paid to play house & doctor with Izzo & de Armas, saying yes to this pointless dreck was not Reeve’s best call. The actresses are fine, and tackle the dubious assignment with the same enthusiasm as their insane characters, but complimenting their performances doesn’t excuse everything else: the sadism is sickening. A needless remake of the cruddy 1977 Death Game that besmirched the résumés of Sondra Locke, Colleen Camp and Seymour Cassel. Camp, for some reason, helped Roth produce this updated redo and does a cameo as well. Aiding Roth write the script—hold the applause—were Guillermo Amoedo and Nicolás López, his collaborators from The Green Inferno, which also starred Izzo (gee, falling for each other while making a cannibal torture fest–ain’t life grand?) Other actors involved include Ignacia Allamand and Aaron Burns. Concocted for $2,500,000, shot in Santiago, Chile, it made back $6,238,000. Slam the door on this one.