This may our last chance to kiss before we’re staked out on an anthill, so just save the “Later in Illinois” stuff

ESCAPE FROM FORT BRAVO—William Franklin Beedle Jr. was raised in sunny and peaceful South Pasadena, California, long after its Native American Xaxaamonga tribe had been displaced by settlers. As William Holden, he saddled up for un-peaceful westerns, ranging from immortal to ignominious. Not in the top tier, this 1953 entry at least ranks as serviceable. Holden scored two hits that year; The Moon Is Blue made a lot of money, and Stalag 17 won him an Oscar. This $1,520,000 cavalry patrol only ranked 73rd in ’53, though it covered costs by grossing $4,600,000. The best thing to come out of it was a career boost for director John Sturges.

Just like a dame: interrupt two guys fighting over her in a waterfall

Arizona Territory, 1863. A tough Union officer (Holden) makes the mistake of letting a seductive Rebel spy (Eleanor Parker) keep him off guard enough to let his Confederate prisoners escape (led by John Forsythe). The ensuing pursuit runs into a trap laid by the Apaches, so Yanks & Rebs have to work together. You can bet an empty canteen that some supporting cast members won’t make it. Sturges’ handling of the action scenes shows some flair. * 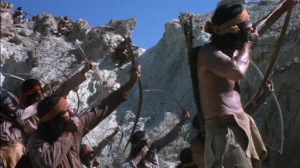 Frank Fenton’s script, which does boast some amusing dialog, emerged from a story by Australian actor and western buff Michael Pate, who was very busy that year, among other things playing a Apache warrior in Hondo. Cameraman Robert L. Surtees got color mileage out of the location shooting in numerous New Mexico locations (including “Rattlesnake”, which ya gotta like), and in California’s Death Valley Natl. Monument.

Look, I agree we’re stuck, but you’re clearly more stuck than I am

* Sturges, itching for something to prove his mettle, pestered Samuel Goldwyn over a non-fiction book Paul Brickhill had written about a WW2 prison break. Goldwyn nixed it with “What the hell kind of escape is this? Nobody gets away!” Partially as consolation, Sturges was given this western. A decade later, with classics like Bad Day At Black Rock, Gunfight At The O.K. Corral and The Magnificent Seven notched on his belt, Sturges finally got command of the WW2 story—The Great Escape.

The Yanks & Rebs vs. Indians business had been visited by Robert Wise in 1950s neglected Two Flags West, and would later get hell-for-leather treatment from Sam Peckinpah in 1965s Major Dundee, where ‘Bravo‘s original idea guy Michael Pate once again played an Apache warrior. 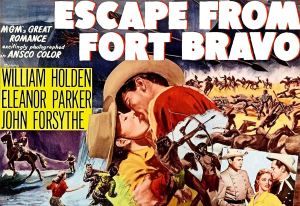