Nine years from now I will be in an actual good western: “The Long Riders”.

‘DOC’ sinks facedown in the hog-trough as one of the worst of the numerous revisionist westerns that made the 1970s such a drag for genre fans, thoroughly unpleasant muddled mumblefests doing at least as much damage to history as the earlier films they offered to correct. When it came to entertainment value they were outgunned by the old breed, like some loud-mouthed prairie piss-ant would have been by picking a fight with Wild Bill Hickok (or Jack Palance). The one good thing about this 1971 pantload of bullpuckey is that it only lasts 96 minutes. * 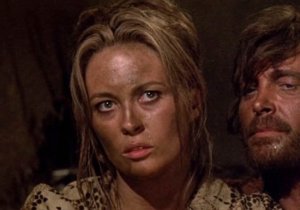 Produced & directed by Frank Perry, written by Pete Hamill (the first screenplay from the notable journalist & novelist), shot in Spain, it’s another take—by far the most noxious—on the Earp-Holliday-Clanton-O.K. Corral saga in 1880s Arizona. Stacy Keach plays Doc Holliday as if the deadly dentists health problem wasn’t consumption but constipation. Faye Dunaway (unconvincingly skanked up) is Doc’s whore toylette Kate Fisher (‘ Kate Elder’ in the movie, to further futz with the record). Harris Yulin bats Wyatt Earp out of a field so far left from Arizona it may as well be Albania. Michael Witney (the less said the better) is paraded as Ike Clanton.

A gross of $2,400,000 left it pistol-whipped in the dirt at 103rd place for the year. Pretentious, boring, choppy, ugly, wildly inaccurate: awful in every respect—casting, acting, direction, writing, editing…

Errps—Worst Wyatt in the West

* Westerns in The Year of Our Nixon 19 & 71—-McCabe & Mrs.Miller (one’a them revision critters) is excellent. Wild Rovers is good. Big Jake and Duck You Sucker are all right, and The Hired Hand has its fans. Lawman, Valdez Is Coming and Man In The Wilderness are mediocre, ditto the comic romps Support Your Local Gunfighter and Scandalous John.  Then we get to dog lousy: The Hunting Party, Hannie Caulder, One More Train To Rob, Red Sun, A Gunfight, something big, Catlow and Shootout. The impacted wisdom tooth of ‘Doc‘ is the worst of the whole posse: clobber it with a hoe, shove it in the outhouse and Katie (Elder) bar the door. 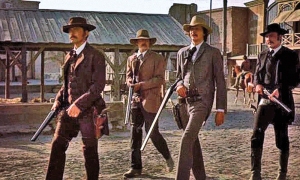 Wrong every which way they can