THE ICE STORM, 1997s other movie concerning people impacted by ice, didn’t place its victims of class and circumstance colliding in a spectacle on an ocean liner. Like the big picture, #1-with-a-berg, this home-centered drama took its well-picked crew of fictional characters and dropped them into another titanic real-life event, the 1973 New England winter storm nicknamed ‘Felix’. For two Connecticut families, their deceptively solid ground of social strata and sophistication is really terra infirma, a first class passage on a slippery slope to disaster.

Thanksgiving weekend of ’73. While the Nixon administration melts down on TV, the fraying moral compass of a pampered, distrusting, benumbed society is reflected in the adults and children of the Hood and Carver families, neighbors and friends whose glass half-full—relative affluence, education, sophistication—is by default half-empty—adultery, alcoholism, alienation. Like tree limbs encased in more ice than they can bear, atmospheric conditions lead to a sudden breaking points.

James Schamus wrote the screenplay off Rick Moody’s acclaimed novel, Ang Lee directed. Witty and painful, acerbic and compassionate, beautifully acted, it’s one of the most perceptive dramas of its day. More than just sensitively evoking key elements of the era in which it’s set—Sexual Revolution, drug bingeing, rampant mocking, inane media noise—it pares below that roiling surface to referee the ever-present boxing match between adolescents and parents, devotion and temptation, security and stagnation. The scalpel-precise writing and Lee’s acuity with staging ensure the situations and behaviors aren’t delivery ciphers for condescension or snark; the slivers of absurdity, desperation, recognition and relief are honestly rendered through in-depth characterizations by a perfectly picked ensemble.

Battling on the grown-up front (as if they know what they’re doing) are Kevin Kline (reasonable to a fault-line, lying in plain sight), Joan Allen (other than maybe Laura Linney, who ever did ignored wives better than Joan Allen?), Sigourney Weaver (looking as if she could devour you like a cocktail olive) and Jamey Sheridan (guileless and pitiable). Chafing under their examples are Tobey Maguire (wry and sly) Christina Ricci (fed up with everything, down for anything), Elijah Wood (pondering meaning behind the math) and Adam Hann-Byrd (directing angst and energy into blowing up toys—hey, don’t knock it).

Regrettably, excellent reviews didn’t drive enough people into the storm: the $18,000,000 invested was frozen out with a gross of just $8,038,000, 122nd place for the year. Other affecting dramas that were ignored by the masses in ’97 included The Sweet Hereafter, Men With Guns, Affliction, Gattaca, A Thousand Acres and Paradise Road. 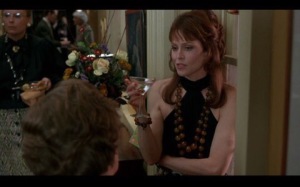