GOOD TIME is not what you will have if you mainline 101 irretrievable minutes of this 2017 dreck dive that star Robert Pattinson described as a “really hardcore kind of Queens, New York, mentally damaged psychopath, bank robbery movie.” At least he was honest about issuing a warning.

Two brothers rob a bank, but their success matches their intelligence quotient. ‘Nick’ (Benny Safdie), who is mentally challenged, is immediately caught and ends up, first in the slammer at Riker’s Island, then in a hospital. ‘Connie’ (Pattinson), who escapes, doesn’t have the excuse of impairment: he’s just an idiot, and a thru & thru sleazeball, whose sole redeeming feature is his loyalty to Nick. Over the course of a night, Connie runs into & over several other desperate down & out denizens of Queens, none of whom you’d want to meet, ever.

The pile-driving $2,000,000 production was directed by co-star Safdie with his brother Josh, who co-wrote the expletives-saturated script (mirroring the emptiness of the characters) with Ronald Bronstein. Many critics raved, and limited release saw a gross of $4,100,000. The actors are fine, especially Pattinson, the hurtling camera work from Sean Price Williams shows some flair, particularly the helicopter (or drone) shots, and the barrel-scraping attitudes of these bottom-feeders are convincingly put over. There’s a pulsating electronica score from Daniel Lopatin (billed as Oneohtrix Point Never), and it must be said that the brothers Safdie achieve propulsive momentum. So what? Do you really need to tour a sewer to get an idea of what might be in one?

With Buddy Duress (no kiddin’) as a punk with a vocabulary limited to variations on the f-word, Jennifer Jason Leigh as Connie’s deranged girlfriend (is there a drinking game involving naming one normal character this actress has ever played?), Barkhad Abdi as a security guard who takes a fall, Taliah Webster as a naive teenager Connie takes cruel advantage of, “hardcore hiphop artist” Necro as a drug dealer slime, and Peter Verby as a psychiatrist (like you’ll need if you think these guys are cool). 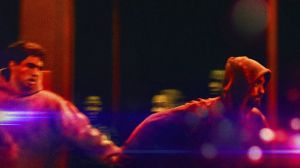