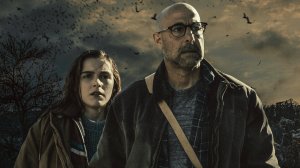 THE SILENCE made but a whisper with audiences in 2019, a limited release drawing just $2,326,000 worldwide. Critics made more noise, with reviews ranging from dismissive to scathing. Fans of Stanley Tucci may be puzzled that this apocalyptic horror item wound up in his to-do-list.

Exploration of a deep cave punctures a hole into an underworld that releases massive flocks of winged predators who lay waste to society. The fearsome critters, called ‘vesps’, fly blind, as it were: they attack cued by sound. Scripted by brothers Carey & Shane Van Dyke (Dick’s grandsons), based off Tim Lebbon’s novel, the story centers on one family’s attempt to escape. They have a slight edge in that their teenage daughter is deaf, so they can communicate through signing. Along with dodging the ravenous vesps, their trek to safety is compromised by some humans (led by a religious zealot) who are as potentially dangerous as the creatures. 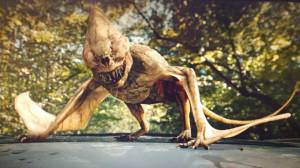 The monsters are effectively nasty. CGI shots of the vast numbers of them swooping and gliding through the skies look pretty cool (screech-from-the-past echoes of The Birds). The actor that plays the crazy reverend (Billy McLellan) has an unsettling presence. 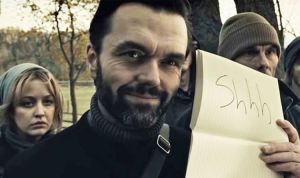 BUT—-even by the suspension-of-disbelief required in this type of setup, the copious logic holes in the script are impossible to ignore, and the sort of wrenching emotional damage the characters would be suffering from the losses they incur is glossed over with a shrug. The brief running time (90 minutes) wraps up with a finale so dead-stop perfunctory it’s almost as though everyone involved agreed to just call it quits. Directed by John R, Leonetti, along with it’s other flaws, it suffers from being compared to the much superior A Quiet Place, although author Lebbon’s book came out three years before that movie. 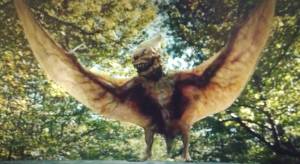 Tucci does what he can as the father. The popular Kiernan Shipka plays the daughter, Miranda Otto the wife, Kate Trotter the grandmother, Kyle Harrison Brietkopf the kid brother. John Corbett is a family pal, Dempsey Brik is the daughter’s boyfriend. They’re on their own, as you will be if you pay much attention to The Silence.