THE PROFESSOR AND THE MADMAN were brought together in the late 1800s to help guide a grand project, the be-all/end-all Oxford English Dictionary. Their struggles became a fascinating 1998 book, written by Simon Winchester. Adapting that to film eventually entailed mirroring the accreditation travails of the original project: the production battles hobbled things enough that the result is the 2019 movie, while sincere and interesting, is also incomplete and unsatisfying. *

England may rule the waves and a good portion of the Earth’s surface in the 1870s, but the language that led the Empire was so vast it defeated efforts to fully contain it. Taking on the herculean task of editing an all-encompassing dictionary, Scottish autodidact James Murray (Mel Gibson) finds an unlikely assist from William Minor (Sean Penn), an American sentenced to a lunatic asylum after a murder conviction. Work on the project helps Minor’s grip on reality somewhat stabilize, and his contributions become invaluable to the determined but overwhelmed Murray. Even Eliza Merrett (Natalie Dormer), the widow of the innocent man Minor killed, becomes attached to him. 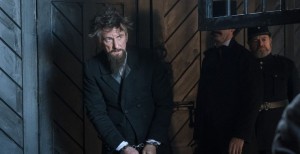 Individual scenes work but as edited the disjointed narrative doesn’t coalesce; the import of the gargantuan project, its reach, array of personalities and the revelations of the language itself (basically the idea behind it all), so well communicated in Simon Winchester’s book, succumb to the simpler dramatic temptations of screen storytelling, giving the stars rein to exercise/exorcise their acting styles. Mel (Braveheart burr back, sans broadsword) smartly plays it low-key. Penn, given what amounts to an insanity defense in interpreting Minor’s mania, too often goes overboard. The touching and true subplot with the widow (Dormer does well) needed more attention.

Gibson acquired the rights to Winchester’s book upon its publication in 1998, initially with the idea of directing it himself. Later both Luc Besson and John Boorman were considered. When shooting finally started in Dublin, in 2016, Gibson turned director duty to Farhad Safinia, who’d co-written Apocalypto with the actor in 2006. Safinia joined Boorman and Todd Komarnicki (Sully) in writing the screenplay. As the shoot went over budget, and additional filming at Oxford was denied by studio overlords, Gibson and Safinia were outraged. Lawsuits delayed release until 2019. With 35 minutes cut from what would have been his directorial debut, a disgusted Safinia took his name off the credits, using the pseudonym P.B. Shemran. The years of planning, months of work and end-game round of legal hassles finished with a $25,000,000 effort only making $6,219,000 internationally. It barely hit 240th place in the States. **

* Winchester’s 288-page book was published in Britain as “The Surgeon of Crowthorne: A Tale of Murder, Madness and the Love of Words”, then in the U.S. and Canada as “The Professor and the Madman: A Tale of Murder, Insanity, and the Making of the Oxford English Dictionary.” A great read. 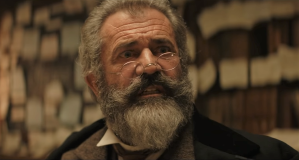 ** Gibson: “First, neither Farhad Safinia nor I ever walked off of the set, or cause the film to ever go over budget. As a co-writer and first time director, Farhad Safinia brought The Professor and the Madman to life while being a consummate professional and at great personal expense….Second, as partners in Icon Productions, Bruce Davey and I are huge fans of Simon Winchester’s best-selling book on which the script was based and worked for 20 years to bring this amazing story to the screen. This was a labor of love for the entire creative team, and it is unfortunate for all concerned that this film was never finished as written….I regret that this film will never be seen as it was meant to be. Making it was never about money for Icon, it was about bringing this amazing story to the big screen. Sadly that has not happened in the way it could have. The Voltage version of this film is a bitter disappointment to me.”

Safinia: “All we had ever asked was for the shooting script to be completed. It never was. Numerous essential scenes set in Oxford as well as multiple indispensable scenes set in Broadmoor Asylum were never shot leaving substantial portions of the script incomplete with irreparable gaps in performance and basic story logic. This meant that I was never able to prepare any kind of coherent cut and had no involvement in the version that is being released. This film was a 12-year labor of love for me. I saw the crew deliver work on it that was truly extraordinary, and do so under difficult conditions….Unfortunately, all of our efforts and entreaties were not to bear fruit….It will remain one of my greatest regrets that the film we all thought we were making will never be.” 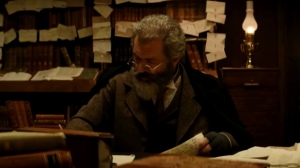 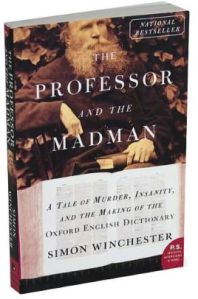 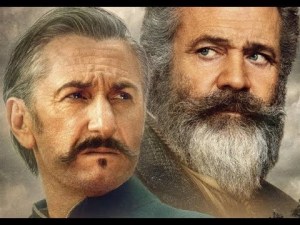 One thought on “The Professor and the Madman”